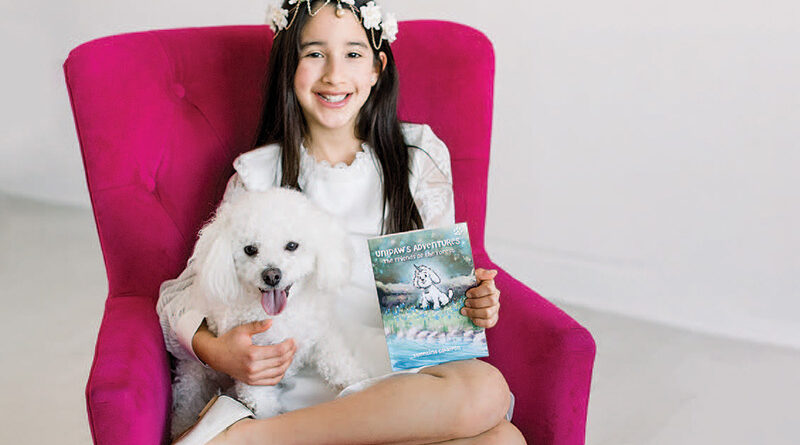 A third-grade Episcopal School of Dallas student started writing about two years ago to keep entertained during spring break.

Valentina Calderón’s work turned into her first book, Unipaw’s Adventures: The Friends of the Forest, published on Amazon in January.

The book, inspired by her dog, Snowy, tells the story of a dog whose special ability is the power to make friends.

“I started writing this book when I was only 6 years old. It wasn’t easy,” Valentina, now 8, said. “I wanted to quit several times because (writing) a book required lots of work and sacrifice. I had to sacrifice some of my free time, play dates, and movie nights. That wasn’t fun.

“Every time I wanted to quit, I looked at my manuscript, all the work that I had already done, and reminded myself of all the time I had invested writing my story. I quickly realized that quitting was NO longer an option. I kept working hard until my manuscript was finished. Now, my book is published on Amazon, and I can’t still believe it. I look back and realize that I made the right choice of keep going and going and never stopping,” she said.

“I wanted to quit several times because (writing) a book required lots of work and sacrifice.”

The pandemic sent her mother, Gladys, CEO of Premier Financial Solutions, home to work. By then, Valentina had her story written, and Gladys was able to help her go about getting it published.

“When I saw it, I saw it had potential,” Gladys said. “I was stuck at home, so I took that manuscript that she finished, and I started helping.

“I said, ‘Well, let’s get to work. Let’s do something productive,’ so we got the manuscript… and we started revising.”

After Valentina made some edits herself, Gladys asked the librarian at Valentina’s school to read it.

“I wanted to publish this book mainly because I wanted to show her that something like that can be done, and she can do that,” Gladys said. “Nothing is impossible.”

They then got quotes from editors and illustrators, had a family member who’d also written books, read it as well, and began asking for tips in a social media group focused on self-publishing.

Gladys said she also saw a Park Cities People article about teen author Gracie Dix and reached out to her and her mom. The latter gave her the contact information of a professional editor in Frisco.

One of Gladys’ clients is an artist and ended up doing the illustrations for Valentina’s book.

Valentina plans to donate 25% of her book’s proceeds to the non-profit, Shining Brownies, which she helped found with her brother. Sebastian. Shining Brownies seeks to help children have equal opportunities despite their circumstances.