There won’t be a third consecutive trip to the Class 6A state baseball tournament for Jesuit, nor a chance for the Rangers to defend their title.

Rockwall-Heath ensured that by overpowering Jesuit 13-3 in five innings on Friday to complete a decisive sweep in the Region II area round series. The state-ranked Hawks pulled away late for a 6-1 win in Friday’s series opener on Jesuit’s home field.

In Thursday’s series opener, Heath Vankirk limited the Hawks (31-7) to two runs through six innings before Heath erupted for four runs in the seventh.

In Game 2, the Rangers took a 2-0 lead in the top of the first inning before the Hawks responded with 11 runs in the first three frames to essentially put the series away.

Hitting problems have plagued the Rangers (23-14) at times this season, and they were an issue against the potent pitching staff of Heath, which allowed only eight hits in the two games.

Still, Jesuit entered the series with momentum after a 10-6 win over Sachse in the deciding game of its bi-district series last weekend. However, Heath scored 38 runs in three games against Lufkin in its first-round series. 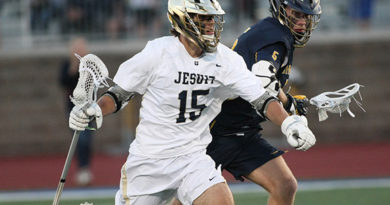 Rangers Look to Rebound in Playoffs