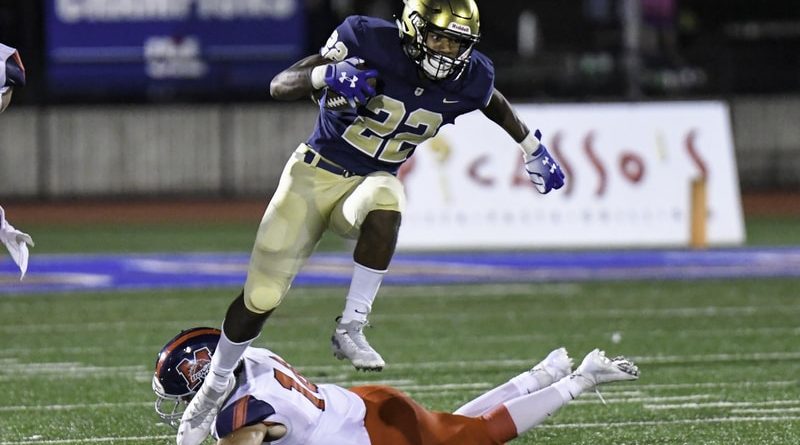 E.J. Smith scored four touchdowns and had over 200 all-purpose yards, but his performance was not enough to withstand McKinney Boyd’s upset bid on Friday at Postell Stadium.

The previously winless Broncos scored on their first four possessions and held off a second-half rally by Smith and the Rangers for a 35-28 win that ended Jesuit’s two-game winning streak.

(ABOVE: Jesuit’s E.J. Smith scored four touchdowns, but the Rangers fell to McKinney Boyd on Friday for their first loss in District 9-6A play. Photo: Rob Graham)

Boyd took an early 7-0 lead on Ja’Tyler Shaw’s 3-yard run up the middle. Jesuit wasted no time getting even, as Smith scored his first of three rushing touchdowns with a 47-yard scamper.

Down 14-7 at the start of the second quarter, Jesuit quarterback Kevin Shuman connected with Smith on a short slant and the junior raced to the end zone for a 43-yard score to again tie the game.

But the Broncos (1-4, 1-1) answered on Collin Drake’s 65-yard strike to Kareem Coleman. After forcing a Jesuit punt, Boyd sustained another long drive and increased the lead to 28-14 on another Shaw touchdown, this one on a 23-yard off-tackle run.

“We made too many mistakes to start the game,” said Jesuit head coach Brandon Hickman. “They made virtually no mistakes in the first half.”

After a crushing block by receiver Travis Whisler, Smith scored on a 12-yard run on the opening drive of the third quarter, cutting the deficit to 28-21.

Jesuit’s defense came to life on Boyd’s ensuing possession, forcing a three-and-out. Then Whisler made another crucial play on the next drive.

On second-and-long at the Rangers 36-yard line, he laid out to make a diving catch to give Jesuit (2-3, 1-1) a first down at the Broncos 30. Smith’s short dive up the middle with under a minute left in the third quarter tied the score at 28 apiece. Smith led Jesuit in both rushing (113 yards) and receiving (81 yards).

“It was a great comeback, and E.J. was spectacular,” Hickman said. “We wanted to keep the ball out of their hands in the second half and we managed to do that, but we came up just short.”

The Broncos scored only once in the second half, but that score proved to be the difference.

Drake, the son of Boyd head coach Don Drake, connected with Coleman on a long fly route on the first play of Boyd’s next series. Then, on third-and-eight at the Jesuit 16, the two hooked up again to put the Broncos in front for good, 35-28.

The Rangers drove to the Boyd 30 on a potential game-tying drive late, but a fourth-down sack ended the threat.

“There’s lots of football left,” Hickman said. “We have five more district games and I feel very confident about our chances. We have a very good football team. We just need a complete game.”

Jesuit has a midseason bye next week, followed by three straight road games beginning Oct. 12 at Prosper. The Rangers don’t have another home game until Nov. 2.

Shuman finished with 195 yards passing and a touchdown and also rushed for 44 yards. Jake Taylor accounted for 105 total yards, while Whisler caught three passes for 41 yards.