Jake Allyn’s football career took him from the fields of Jesuit to Cornell University. He never expected his next play to be on TV.

For Allyn, growing up in Texas meant taking on the role of a football player, which left little room in his schedule for much else.While he enjoyed making home movies with his brother when time allowed, playing football was always his top priority. It wasn’t until he joined his brother on a trip to Indonesia for a film that he realized he had other passions.

“Seeing the local actors and extras take on multiple roles and personalities for this project was incredible,” Allyn said. “I knew that I wanted to do the same one day.”

After returning from Indonesia, Allyn enrolled in several acting classes and landed roles in student films at Cornell. When college ended, he made the move to Los Angeles, bent on turning his dreams into reality. While Hollywood hit him with plenty of “no”s, Allyn was still able to land smaller gigs on such shows as The Middle, Blood Relatives, and Killer Kids.

“When college and my football career [were] coming to an end, I knew I needed to find something that gave me the same rush as the game did,” Allyn said. “Whenever I’m acting, I can feel those same butterflies as I did on game days, and I never want to give that up.”

His momentum and passion for the craft catapulted him into his role on The Quad, a show that tackles more than just a football. Having grown up in the world of sports in the South, Allyn felt even more attached to the significance of the show.

“We’re portraying topics that people don’t want to discuss when it comes to sports,” Allyn said. “Each episode sheds light on race, gender, and the expectations that come with being on and off the field.”

Allyn hopes The Quad is only the start of a career full of important characters and impactful storylines. He is working alongside his brother as the lead in the upcoming indie thriller Overexposed, which tackles issues of cyberbullying and date rape. He is also writing and starring in two new thriller films, Foreaken and Ex-Patriot.

While Hollywood is keeping him busy, Allyn still finds the time to venture back to his old stomping grounds. With many of his family and friends rooted in the area, Allyn said that Dallas will always be home.

“I’d love to one day be the Matthew McConaughey of Dallas,” Allyn said. “Getting to make memorable movies while still living in my city would really be the best of both worlds.”

Orion Touches Down in University Park

Prove Your Manhood at the Fair 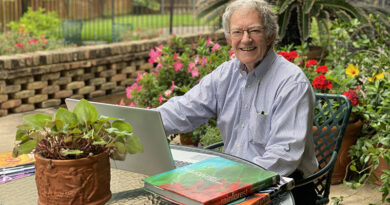 Why Does a Retired Lawyer Need to Learn About Lava?