Jeff Loyd has known Cash Carter for years. But the Highland Park boys golf coach really took notice of Carter for the first time at the Class 4A state tournament in 2014.

Carter, then a freshman, was the youngster on a five-man HP squad that included three-time state champion Scottie Scheffler. And although the Scots were the runner-up in the team standings, Carter played the course at UT Golf Club in Austin with the poise and confidence of a veteran.

“He was our best player,” Loyd said. “He’s become a good leader for us. He’s basically taken over for Scheff.”

In the fall, Carter will return to Austin to join the golf team at the University of Texas, where Scheffler is currently a senior. But first, he hopes to duplicate another of Scheffler’s accomplishments in May by winning a state championship, something he narrowly missed three years ago. The Scots didn’t qualify for state at the Class 6A level during the past two years.

“It has been a goal of mine the whole time since I’ve been here,” said Carter, who’s spoken with Scheffler and Cody Gribble, another HP and UT alum who’s now playing on the PGA Tour. “It’s just been maturing as a player and developing my golf game. I’m just trying to get better every day.”

Loyd said that since his freshman year, Carter has developed the mental toughness to match his physical skill.

“The big difference with him is his work ethic and concentration level. He’s very motivated and driven,” Loyd said. “Now he’s maturing and learning how to score when he’s not playing well.”

As an example, Loyd points to the first round of a tournament earlier this spring in Mansfield, when Carter never looked comfortable on the course and made some errant shots, yet still finished with a 1-under round of 69.

Carter grew up around golf under the tutelage of his father, Chip, who won a conference title at SMU in 1988. But he was primarily a football player until seventh grade, when he started working with a golf pro at Northwood Club.

One thrill for Carter this season has been playing alongside his younger brother, Trip, who is a sophomore for the Scots.

Carter is ranked in the top 75 nationally by the American Junior Golf Association. He had a breakout summer campaign in 2016, when he was a runner-up at both the AJGA Under Armour Jordan Spieth Championship and the Bubba Conlee National Junior event.

“That was a big stepping stone, knowing that I could play with those kids at that level,” Carter said. “I felt a sense of belonging.” 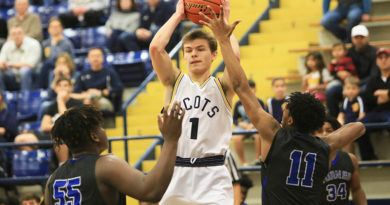