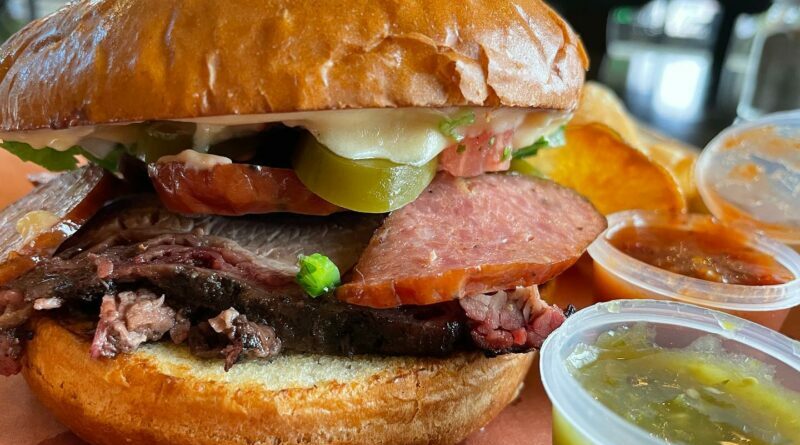 Five-time Big Tex Choice Award winner Abel Gonzalez is taking his talents to the restaurant world — which means fans don’t have to wait for the State Fair each year to enjoy his creativity.

AG Texican Restaurant and Catering will feature Tex-Mex and smoked meats, a press release indicated. The restaurant is located at 7101 Harry Hines Blvd., where it’s open for breakfast and lunch Monday through Saturday.

Early-bird diners will enjoy a wide variety of breakfast tacos, quesadillas, plus gourmet doughnuts with toppings such as fresh strawberries. Lunch offerings include Tex-Mex classics such as quesadillas with choice of brisket, pork, steak, chicken, grilled veggies, or cheese; gorditas and flautas; tortas and tamales with choice of smoked pork or smoked brisket; and sides such as cilantro rice, bacon-beer beans, and jalapeño potato salad. There’s also a daily special for $10 to $12, with options such as half smoked chicken and smoked ribs.

The word “Texican” is one that Gonzales has used for years.

“It just has so many meanings to me,” he said. “My family are original Texans, meaning I don’t have any direct ties to Mexico, no family there. We have been in Texas forever! People always ask me what part of Mexico I am from and I always reply that I am Texican. My food is a blend of two cultures – Mexican and American. So when it came time to name this concept, it just felt right.”

With a dual focus on catering, the Harry Hines location also operates as a catering facility that allows Gonzales to cook for parties of 20 to 2,000. While you won’t see the full range of offerings on the website, the options are expansive. Gonzales is proficient in many cuisines, from Chinese to Italian to Mexican, and works with clients to best meet their needs from a taste and budget standpoint so his offerings truly accommodate all palettes.

An award-winning State Fair of Texas vendor, Gonzales has been entering into the Big Tex Choice Award contest since 2004, a contest for the most creative deep-fried food. He has won the contest five times in categories such as “Best Taste” and “Most Creative” with multiple deep-fried inventions earning him the nickname “Fried Jesus.”

In 2004, he won with the Fried Peanut Butter and Jelly Sandwich, in 2005 with Fried Coke, in 2006 with Fried Cookie Dough, in 2008 with Deep-Fried Butter, and in 2011 with Fried Jambalaya. Other finalist inventions have included Deep Fried Lobster and Deep Fried Pineapple Rings. He currently operates two booths at the State Fair of Texas under Vandalay Industries.

Oprah has referred to him simply as a “guru” and Andrew Zimmern, former host of the popular Travel Channel show Bizarre Foods, declared Gonzales “the Willy Wonka of the Texas State Fair.” He has appeared on such national programs as Oprah, The Today Show, The View, and Rachel Ray. He served as a judge on the Destination America television show Deep Fried Masters and has competed on Chopped. He looks forward to taking America behind the scenes of what it takes to operate at the State Fair of Texas in the new A&E show Deep Fried Dynasty.

AG Texican Restaurant and Catering is located at 7101 Harry Hines Blvd., and can be found online at https://www.agtexican.com. Hours of operation are Monday-Saturday, 8 a.m. to 2 p.m.