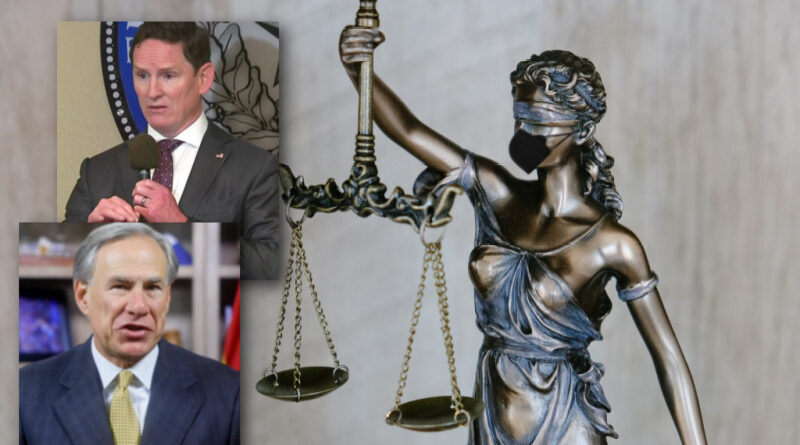 After hearing arguments for and against whether a mask mandate falls under the purview of the local health authority or the governor on Tuesday, a district court judge ruled that Dallas County Judge Clay Jenkins’ mask mandate can continue.

In an online hearing that lasted from about 9:45 a.m. and concluded shortly after 2 p.m., Todd Dickerson and Benjamin Dower, attorneys for Abbott, argued that Jenkins’ attorneys  — Charla Aldous, Doug Alexander, and Brent Walker – were misinterpreting the sections of the law pertaining to the authority of the governor.

Judge Tonya Parker, of the 116th Civil District Court, heard the two sides, as well as testimony about the public health implications of the pandemic and whether mask-wearing was an effective measure in preventing the COVID-19 delta variant.

After hearing testimony and cross-examination, Parker acknowledged the enormity of the judicial task ahead.

“It’s not lost on anyone on this screen that this has been a stunning moment,” she said. “No doubt, the eyes of our state are upon us.”

Jenkins’ attorneys argued that the executive order ran afoul of the state disaster laws, and prevented the county attorney from mitigating the spread of the virus.

“The bottom line: We are here because Judge Jenkins wants to do his job,” Aldous said.

“The harm is more than imminent — it is already here,” Walker said in his closing statement. “ … there is no credible argument against the use of a mask mandate to prevent extreme harm to citizens and the economy.”

Dower and Dickerson provided no witnesses, and argued that the experts who testified weren’t relevant because “this is really a question of law, not fact.”

Dr. Edward Septimus, who works at Harvard Medical School and Texas A&M College of Medicine, testified that masking worked, and that there were studies that backed that claim, including one where two salon workers with COVID symptoms came to work, saw more than 100 clients, and were masked. None of the clients tested positive.

“If we all wore a mask, the people who don’t know they were infected are less likely to transmit that to somebody else,” he said. “We need to do everything we can to reduce transmission.

(Read: Our ongoing coverage of the pandemic)

“We have got to go to other measures because we have to protect the public health of the community,” he said of a mask mandate. “It’s sad. I hate it. But I think it’s the important thing to do.

“Masks are very effective,” he added. “They can be done immediately. There is essentially no cost associated with them. This is the right thing to do for all of us.”

Dr. Benjamin Greenberg, a neurologist who specializes in autoimmune diseases, told Dower on cross-examination that there’s a difference between making decisions about personal health and those that also impact public health, using indoor smoking bans as an example.

The ban, he said, was to protect other people from secondhand smoke generated by someone who chooses to smoke.

Masking was similar, he said, because “we are at risk due to the personal health decisions of others.”

In her ruling Wednesday, Parker said that Jenkins showed that residents will suffer “probable imminent and irreparable injury through County Judge Jenkins being precluded from exercising his authority.”

After noting the delta variant is already threatening to overtax the region’s healthcare system and has increased hospitalizations and death, she said, “each of these bases for probable imminent and irreparable injury independently supports the issuance of the requested temporary injunction.”

Parker is set to review the injunction on Jan. 10, but it is likely that Abbott and Paxton will file an appeal sooner than that.

“We are grateful the court recognized that in a local crisis, local responders such as Judge Jenkins are in the best position to decide what is best to protect local citizens,” Aldous said in a statement. “What’s more, the law in Texas conveys the authority on him, and other county judges, to take steps that are necessary to protect the people from this deadly virus. That is what he is determined to do and, with this ruling, what he will continue to do. We fully expect these issues will continue to work their way through the appellate courts, and we will be ready to continue making our case in the appropriate venues, as needed.”

Shortly after Parker’s ruling was announced, Abbott issued a statement about vaccination mandates.

Abbott said he would issue an executive order reiterating the ban on mandating COVID-19 vaccinations by any government entity in the state. He also added the matter to the current special session agenda.

“Vaccine requirements and exemptions have historically been determined by the legislature, and their involvement is particularly important to avoid a patchwork of vaccine mandates across Texas,” said Abbott.

At 2:30 p.m., Jenkins spoke with reporters via Zoom about the case.

And while he’s still mulling over whether fines will be reinstated, he was clear: “It means that the order we have in place will remain in effect. It means that the schools in Dallas County are required to have a mask policy.”

Jenkins said he hoped businesses were working to keep their customers and employees safe already.

“Hopefully we will be following the law, and doing what we can to protect our fellow citizens,” he said. “If people don’t like it, blame it on me.”

Over the past month, several protests directed at Jenkins’ decision have cropped up, and the county judge acknowledged Wednesday that there are those that are upset with him — but that he isn’t focusing on that.

“I can’t honestly tell you I’ve given it a minute’s thought what they’re going to do to me,” he said, adding that his focus is on the health of the county.