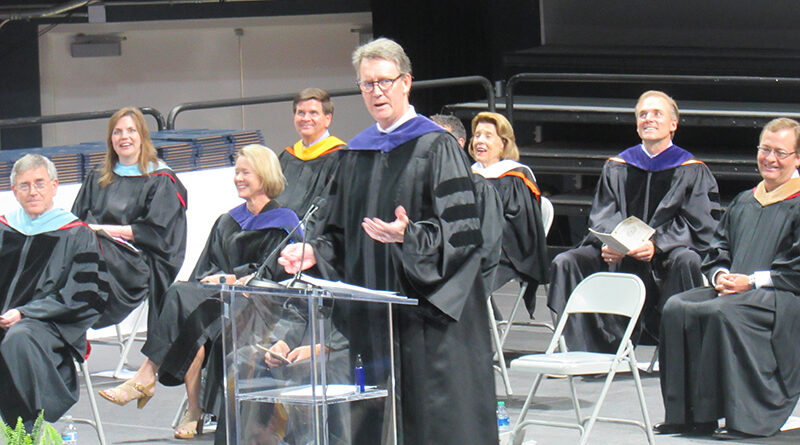 Jim Hitzelberger reflects on a dozen years of service to HPISD

In 12 years as a trustee, former school board president Jim Hitzelberger helped see Highland Park ISD through two bond elections plus facilities overhauls, rezoning, the opening of a fifth elementary school, and a global pandemic.

Maybe, as a result, leaving the board feels like a graduation.

During commencement, Hitzelberger told Highland Park High School Class of 2021 members how they were finishing kindergarten when he was first elected.

“And so, I kind of feel like I’ve kind of gone through this journey with you,” he said.

Without a doubt, I would have to say that I am most proud of the many community members, HPISD staff, architects, and fellow trustees that had the vision and desire to plan and execute the 2015 bond.

“Without a doubt, I would have to say that I am most proud of the many community members, HPISD staff, architects, and fellow trustees that had the vision and desire to plan and execute the 2015 bond,” Hitzelberger said. “Being a small part of that journey was remarkable.”

His service also has come with contentious debates.

“We get a bad rap, no matter who is on the board, of ‘rubber stamping’ the administration’s decisions,” he said. “That couldn’t be any further from the truth. Without getting into specifics, in my 12 years, we had disagreements on facilities, finance, instructional materials, rezoning, just to name a few. All trustees bring unique talents and perspectives to the table.”

On July 3, Hitzelberger and his wife, Laurie, will ride as grand marshals in the Rotary Club of Park Cities Fourth of July Parade, taking a journey postponed a year when the pandemic canceled last year’s affair.

She also served the district, including as the only principal in HPISD history to lead two schools simultaneously, McCulloch Intermediate and Highland Park Middle.

Perhaps through his service, Jim Hitzelberger said he has better understood the influence his parents’ contributions had on him.

His mother, Barbara Hitzelberger, still the only woman to serve as a mayor of University Park, worked with the Junior League, La Fiesta de las Seis Banderas, and other organizations.

“We just grew up seeing our parents serve others,” he said. “It was just something that was routine at our house, as it is in many homes in our community, and it wasn’t until later in my life that I realized the amount of work ethic and commitment they had to do all they did while working and raising a family.”

Check Out These Budding Hoop Stars