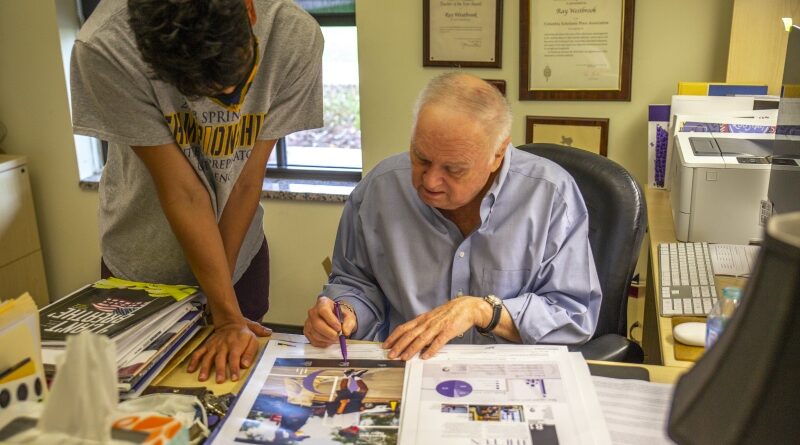 Ray Westbrook, a journalism teacher and adviser to the newspaper and yearbook at St. Mark’s School of Texas, was recently named the 2021 National High School Journalism Teacher of the Year by the Columbia Scholastic Press Association.

Westbrook, an adviser to The ReMarker student newspaper, The Marksmen yearbook, and Focus, a special interest magazine, was selected from among 17 teachers who were national finalists. The National High School Journalism Teacher of the Year Awards program is managed by the Columbia Scholastic Press Association and co-sponsored by Dow Jones News Fund, with additional support from Poynter Institute for Media Studies and The Wall Street Journal.

“Of course, some would argue that Ray’s success is the natural product of a rich environment. I vigorously and categorically reject that opinion,” Bobby Hawthorne, formerly director of the Interscholastic League Press Conference at the University of Texas at Austin, wrote. “I have worked with many, many schools with resources as great or greater than St. Marks, and few, if any, have come close to achieving what his students accomplish issue after issue, edition by edition, year after year after year. His publications are entirely student produced. Anyone who has ever worked with Ray and his boys will testify under oath to that.”

“From exploring depression to examining recruiting at private schools and colleges, every issue of The ReMarker features robust, substantial, and localized coverage of contemporary concerns. The ReMarker clearly makes an impact,” Lundgren wrote.

Edmund J. Sullivan, executive director of the CSPA, also summarized his perception of the program that Westbrook has advised for 20 years.

“His journalism program at St. Mark’s School in Dallas, Texas has developed a national reputation for in-depth reporting, top notch writing and editing as well as mastery of storytelling,” Sullivan wrote. “They successfully tackle a wide range of topics, many considered taboo in other schools, with sensitivity and professionalism.”

Westbrook received a plaque and was featured in an exclusive interview during the CSPA Convention Showcase March 19. He will also receive a one-year subscription to The Wall Street Journal as well as access to webinars from The Poynter Institute. One of his students will be chosen for a $1,000 college scholarship for journalism study.