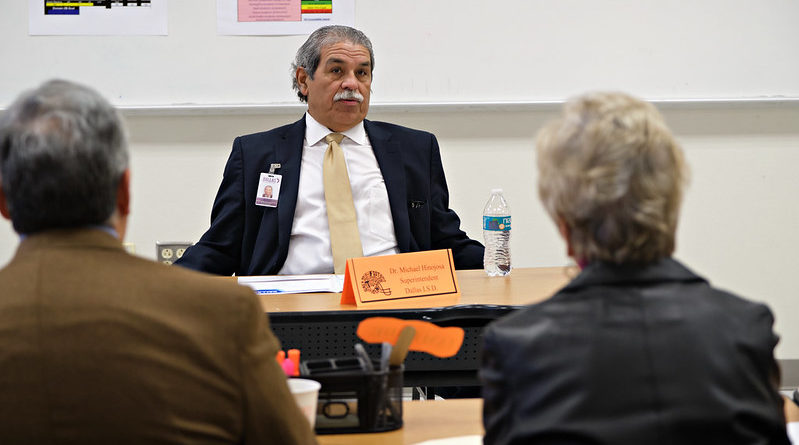 According to school board trustee Joyce Foreman, who shared the district’s communication with the board, the decision began to be communicated to staff Monday afternoon and evening.

“After today’s conference call and due to the fluidity of the recommendations coming from the CDC, Dallas ISD will be closed indefinitely,” the missive Foreman and the trustees received said. “All of senior staff is prepared to move forward to provide services including instruction, beginning on Monday, March 23.”

On Twitter, trustee Miguel Solis said that more detailed information about payroll, food distribution, and other services would be coming later.

“We have activated at-home learning, our teachers are prepared to begin distance instruction, and Dallas ISD Food and Child Nutrition Services (FCNS) will distribute meals at select campus locations,” the district said.

Not long after the district’s decision began to filter out, trustees released a statement offering its support of the move.

“Dallas ISD is closing schools to do our part in slowing the spread of COVID-19 and to protect our friends and neighbors who are vulnerable because of their age or underlying illnesses,” the letter said. “We also urge our staff, students, and families to do their part in halting the spread by following suggested CDC guidelines, including social distancing and good hygiene.” 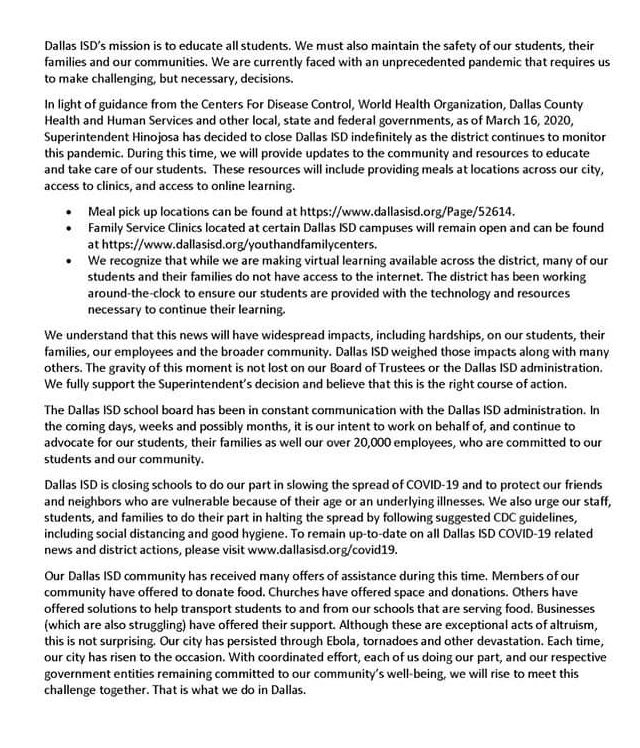 The board also said that the district has had many offers of assistance, including offers of food donations, workspace and material donations, and even transportation services to bring children to food distribution points set up by the district.

Last week, Superintendent Michael Hinojosa outlined plans for continuing learning should the district be forced to shut down for a time. Thanks to 1 to 1 devices, sixth-grade through 12th-grade students can take online classes (depending on internet connectivity at home). Students in pre-K through fifth-grade were sent home with activity and lesson packets.

In a letter to parents March 16, Hinojosa acknowledged that the closure would hit many families hard.

“We recognize the significant impact this extended closure will have on the entire community, especially for families who depend on the district for critical services,” he wrote. The district will begin notifying parents by robocall in the coming days.

The decision comes on the heels of twin announcements Monday – Gov. Greg Abbott canceled STAAR testing for this year, and Dallas Mayor Eric Johnson announced that public and private gatherings of 50 or more people would be prohibited as of midnight, and dine-in restaurant and bar service is no longer allowed (we’ll have more in an upcoming story soon).

“Our city has persisted through Ebola, tornadoes and other devastation,” the trustees’ statement concluded. “With coordinated effort, each of us doing our part, and our respective government entities remaining committed to our community’s well-being, we will rise to meet this challenge together. That is what we do in Dallas.”

One thought on “Dallas ISD to Close “Indefinitely””