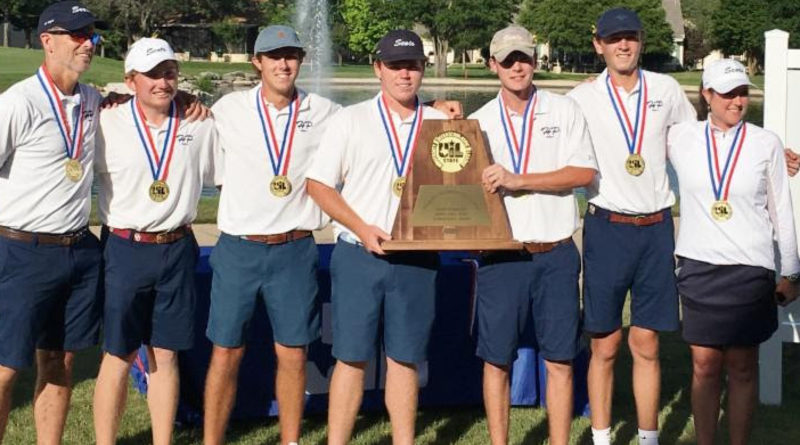 GEORGETOWN — Every trophy has a story to tell.

The Scots shot a 5-over-par score of 581 over 36 holes during two days. They led the Chargers by eight shots entering the final round, and things tightened up quickly during the front nine.

In stepped an unlikely hero, Jack Watson. The junior had been playing with the HP second team all season until state, when head coach Jeff Loyd plugged Watson into the Highland Park Blue lineup based on his play at the district and regional tournaments.

After a nervy 5-over 77 on Monday, word of his even-par 72 calmed everybody else down during the final round.

“I just went out there and played my game, because I knew it was going to come,” Watson said. “The guys on top — Scott [Roden], Trip [Carter], and Turner [Hosch] — when I play with them and hit a bad shot, they’ll let me know. That’s kind of motivated me.”

Hosch had the best overall score, shooting 1-over 145 to tie for sixth individually, but he had to fight for a 76 on Tuesday that didn’t end up counting toward the team score. He sensed things were getting close in the team competition around the time he started the back nine.

He later found out from Loyd that his par putt at No. 15 kept Boerne Champion from pulling even heading into the final stretch of holes.

“For [Watson] to come in with even par, that changed everything,” Hosch said.

There was some drama left in the final holes, as Watson had to hack out from behind a pair of trees, using a sweeping hook to salvage par at No. 17, and Carter drilled a 35-foot putt at No. 18, his final shot in high school, for a 71.

Of the top six teams, Highland Park’s first team was the only one not to better its score from the first round. The Scots thrived in windy conditions on Monday, shooting 290 (2-over).

Highland Park Gold took advantage of the ideal scoring conditions on Tuesday, shooting 304 to secure sixth place. It was the first time the Scots brought two squads to state since 2013, and they showed off their depth with Hudson Weibel (148) finishing among the top 20 individuals and Pierce Johnson (152) shooting the lowest round by an HP golfer on Tuesday with a 2-under 70. Christian Clark (160), Key Coker (160), and Knox Wagoner (162) rounded out the squad.

In the end, HP got what it came for. The Scots have now won a state title in 15 out of the past 30 years.

“We come in here obviously the favorite, and we know everybody is gunning for us,” Carter said. “To be able to fend them off and play well when it counts, it means a lot.”