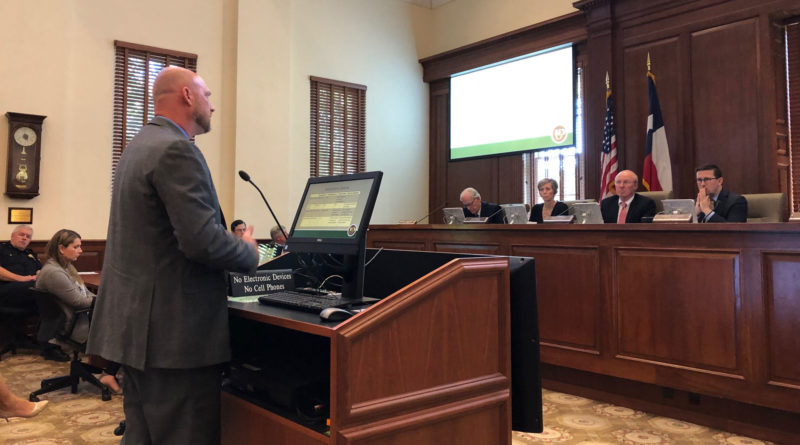 You don’t have to attend many University Park City Council meetings to figure out that Gage A. Prichard Sr. doesn’t like signs.

The council member can’t get rid of as many as he would like because some are necessary for the city to enforce regulations such as parking restrictions.

So, Tuesday before joining his council colleagues in approving parking changes at Snider Plaza, Prichard got assurances from director of public works Jacob Speer that no more than three signs would be needed.

A proposal to allow two-hour parking was rejected because with SMU across the street, city leaders didn’t want to tempt students to park there while going to class, Speer said. In other action, the council, at the request of property owners, modified the residential parking district near the Moody Family YMCA to remove parking restrictions in front of homes at 6107 and 6205 St. Andrews Drive.

New Recycling Agreement
With a down market for recyclable commodities, the city has revised its agreement for recycling processing services. Under the new deal, FCC will split with the city revenues in excess of $95 a ton, instead of $79.75 a ton, but the city will never have to pay FCC no matter how low the blended value of the recyclables drops.

The previous deal required the city to pay when blended values dropped below $50 a ton, something the city had so far not had to do.

“We haven’t had to write them any checks,” Speer told the council. “They haven’t written us many either.”

The city received about $3,000 last year under the former agreement, he said.

Speer added that the city didn’t have many other options for recycling processing if FCC chose to exercise its 60-day cancellation clause. The few other providers available would want similar or worse deals, he said.

“The other option is to no longer collect recycling and send everything to the landfill,” Speer said.

Competitive Pay
Based on historical practices, city staff would likely be recommending a 3 percent pay hike for employees in the next budget – a $600,000 cost, assistant city manager Lea Dunn said.

However, a compensation study done for the city by Public Sector Personnel Consultants (PSPC) suggests the city should spend at least $220,000 more than that to meet a goal of paying at the market average.

“Most of your employees drive through five or six cities to get here,” said Dunn, explaining the city doesn’t want to lose worker to those other communities.

City staff hasn’t yet come up with a recommendation on how to pay for the increases nor determined whether they should begin with the budget year in October or sometime later, Dunn said.

“We have a recommendation in front of you, but we don’t have a plan to get there yet,” city manager Robbie Corder said.