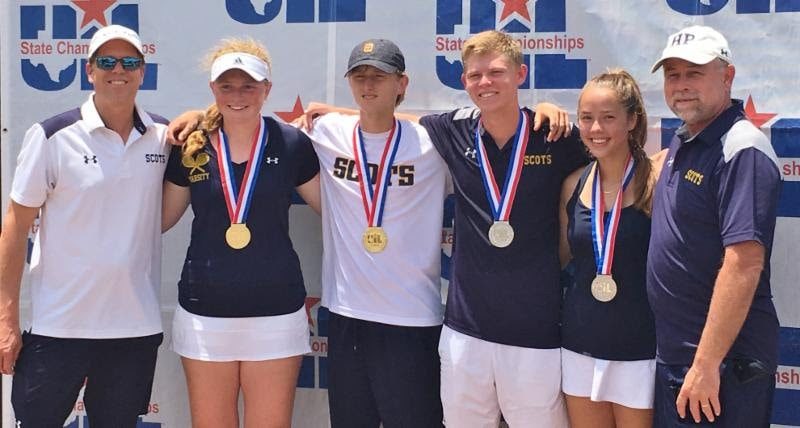 Highland Park took its dominance in mixed doubles tennis to a new level on Friday at the Class 5A state tournament in College Station.

Not only did the Scots win their third consecutive title in that bracket, but they turned the championship match into an all-HP affair. Cole Burnam and Katherine Petty defeated teammates Rhett Bailey and Ashlee Newton, 6-4, 6-0.

Petty won her second consecutive gold medal in mixed doubles after teaming with Phillip Quinn last year. It’s the first gold medal during the spring season for Burnam, and the first silver medal for Bailey and Newton.

Bridget Stammel capped a sensational freshman season by winning the 5A girls singles title. She won all three of her matches at the state tournament in straight sets, including a 6-2, 6-2 victory over San Antonio Burbank’s Val Navarro for the gold.

HP brought home three more medals for a total of six, which is a major improvement after the Scots earned just one medal at state a year ago.

Annika Juergens and Lizanne Boyer claimed silver in the girls doubles bracket after falling in the title match to a tandem from San Antonio Alamo Heights.

Peyton Dooley fell in the semifinals in boys singles to eventual champion Brandon Do of Nederland, meaning he shares the bronze medal. Likewise for Jourdan Krueger, who lost to Navarro in the girls singles semifinals.

In boys doubles, HP’s Ray Saalfield and Mikhail Commer were defeated in the quarterfinals. Commer and Burnam fell in the opening round in the same bracket last year.

Lobos Power Past Scots in Playoffs