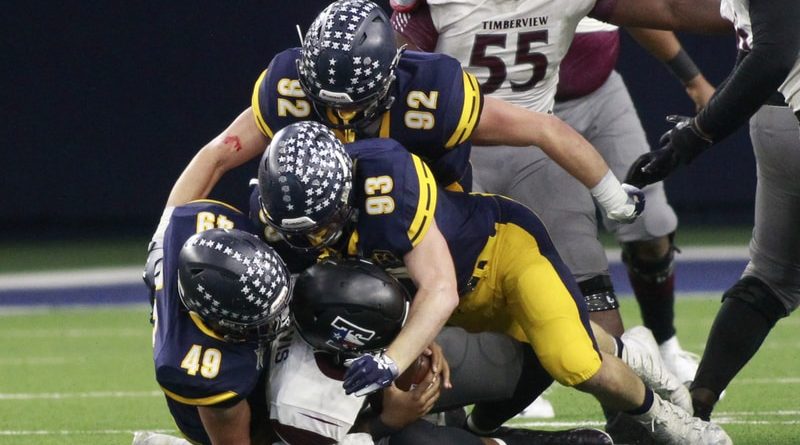 The Highland Park defense turned in another stellar effort on Saturday during a 52-7 playoff win over Mansfield Timberview in Frisco. (Photo: Melissa Macatee)

FRISCO — Third-round playoff game aren’t supposed to be this lopsided, with the game practically decided by the end of the first quarter.

However, Highland Park’s 52-7 demolition of Mansfield Timberview on Saturday at the Ford Center at The Star was perhaps the most decisive victory in a season that’s seen many of them for the Scots.

In fact, the domination in every facet of the game was even more apparent than in the first meeting between the District 6-5A Division I rivals three weeks ago, which HP won by five touchdowns.

The unbeaten Scots (13-0) will carry plenty of momentum into the Region II final against familiar postseason opponent Tyler John Tyler (10-2). That game is slated for 1 p.m. on Dec. 8 at The Star.

The HP defense forced five Timberview turnovers, including three in the first quarter, when the Scots cruised to a 31-0 advantage and never looked back.

Chandler Morris tossed three touchdown passes and also ran for a score. Finn Corwin caught nine passes for 142 yards and a touchdown, and also returned a punt for a score. And the Wolves (7-6) had no answers for anything HP tried.

“We got a lot of turnovers early in the game and got a short field,” said HP head coach Randy Allen. “We were just hot. We scored every time they turned the ball over.”

The barrage began on the second play from scrimmage, when Morris found Corwin for a 61-yard scoring strike — the 16th such connection between the two this season. The duo later had a potential second touchdown on a long screen pass nullified by a penalty.

HP’s Hudson Clark intercepted a pass near midfield to stop the first Timberview drive, and the Scots capitalized with a 29-yard field goal from Wesley Winters.

The ensuing kickoff took a favorable bounce for HP, and Harris Feferman recovered, again setting up the Scots with great field position. A 1-yard plunge by Morris made the score 17-0.

The Wolves fumbled again on the next snap, and Gus Vincent recovered at the Timberview 26-yard line. Morris found Drew Scott with a touchdown strike two plays later.

HP then forced a Timberview punt, which Corwin returned 67 yards to the end zone, extending the margin to 31-0 before the first quarter had even expired.

“It was a great defensive performance,” Allen said. “They have two or three guys who can go all the way on any play. Our guys did a great job of tackling. This group has gotten a lot of takeaways all year.”

The Scots drove 70 yards on 11 plays on their next possession, culminating in a 14-yard touchdown pass from Morris to Avery Lewis. That drive consumed almost six minutes off the clock.

The Wolves threatened to score late in the second quarter, but HP’s John Beecherl intercepted a fourth-down pass on the last play before the break. The Scots allowed only 87 total yards in the first half.

Hunter Heath rushed for two touchdowns after halftime, helping HP stretch its advantage to 52-0 late in the third quarter. Heath finished with a team-high 62 rushing yards on just five attempts.

Just as in the first meeting, Timberview avoided the shutout in the fourth quarter, when Jordan Davis ran 33 yards for a score.

Davis threw for 105 yards for the Wolves, while Montaye Dawson tallied 111 all-purpose yards. Dynamic playmaker Stacy Sneed, who accumulated more than 500 yards in Timberview’s two playoff wins, was limited to 34 yards before being ejected in the third quarter following a skirmish.

Meanwhile, Morris completed 17 of 24 throws for 243 yards, surpassing the 3,000-yard barrier for the season.