A magnitude 7.6 earthquake struck the Kocaeili province of Turkey around 3 a.m. in 1999, when Pehlivan was 13 years old.

The tremors lasted less than a minute, and when Pahlivan emerged from the car she was hiding in with her family, the surrounding city of Ankara was decimated to the tune of more than 17,000 dead and 45,000 injured.

That’s not counting the apartments – and tenants – that fell into the ocean and were never accounted for.

“Really, it could be a lot more [than 17,000 dead],” Pehlivan told Dallas students recently. “It was such a huge disaster. But it changed my life and put me on the path that I am on now.”

As she got older, Pehlivan became involved with the construction companies of Turkey, consulting and overseeing the building of structures – always with the 1999 earthquake, and the damage it did, in her mind.

Fascinated by engineering, she moved to Austin and received her doctorate from the University of Texas in 2013. From there, she worked on geotechnical and earthquake projects in the United States, Canada and Mexico.

Her work recently brought her to the Perot Museum of Nature and Science in Dallas, where her film, Dream Big 3D, was shown. The film and Pehlivan’s visit kicked off “Engineers Week” at the museum, where exhibits offered hands-on activities involving bridge-building and structure creation.

The girls, assigned to two teams of 10-students each, had 20 minutes to construct bridges out of cardboard over two benches in the museum atrium. Both bridges held more than 5 pounds, and the winning bridge supported 9 pounds.

As the students built, Pehlivan split her time between the two groups, asking the girls questions and aiding in the creation of the bridges. Following the competition, she said she hopes the contest aides the girls in future science and mathematics projects.

“And it’s not just about getting girls into science and math, or engineering, or architecture,” she said. “It’s about girls being inspired and encouraged to do whatever they want in life. I was very lucky – my parents always supported me and never doubted me. With support and opportunity, girls can be successful in any field they choose.”

“One of the things we know about people who go into careers in [science, engineering, technology, and math] is that the single-biggest predictor of that career choice is how much you like science between the ages of 6 and 11,” she said. “We’re really committed to putting on events that inspire that age group, because we need them.” 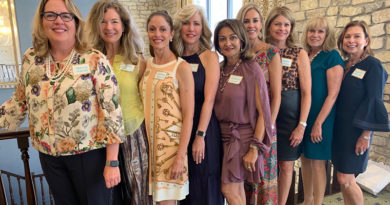