The Episcopal School of Dallas plans to break ground in late spring on a new lower school building, a project which will unite the school’s lower and upper schools on one main campus.

The news follows the recent announcement of a record-breaking $15 million donation from the Perot family to help move the lower school to the heart of the Merrell Road campus.

The endowment from the Perot family is the largest gift made to ESD since its founding in 1974.

The new lower school will open intellectual, physical, spiritual, and social connections to the middle and upper schools, administrators said.

Plans for the new facility reveal grade-level homerooms connected by shared collaboration spaces known as “neighborhoods,” which were designed to help solidify and define the identity of each grade.

The lower school also will house commons areas on each floor, a library, and media and design zones. A community staircase will anchor the building and provide a view of a fresh-air amphitheater that will serve as ESD’s only outdoor stage.

Administrators said the venue allows informal access at recess for impromptu theatrical exploits but also serves as a wonderful natural setting for small-scale performances such as string concerts, poetry readings, and class plays.

Chelle Wabrek, head of the lower school, said the new building won’t pave the way for more students, saying “we’re designed to be small.” Instead, she said, the changes would foster better relationships between students.

In the echo of the school’s drumline, Clark announced at the Friday Night Fiesta that more than 70 percent of the $36.5 million campaign to build the lower school had been raised — news that was followed with roaring applause and the rustle of the varsity cheerleading team’s silver pom-poms.

The excitement continued with the news that Lisa and Kenny Troutt had committed $1.5 million for an endowment to maintain the ESD athletic fields named for them. An anonymous donor also made a $250,000 challenge grant to the annual “Above and Beyond” fund.

“The world needs ESD graduates who are well prepared to lead with intelligence, faith, and character,” head of school Meredyth M. Cole said. “[The donors] each deserve special recognition for their incredible efforts to ensure our gifted faculty and staff have the resources required to ignite lives of purpose for our students and graduates.” 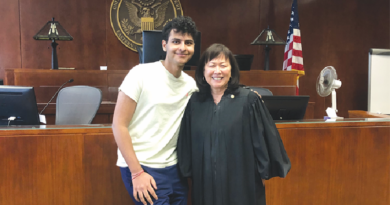