Hillcrest snapped a five-game losing streak and picked up its first District 11-5A victory in emphatic fashion.

Trevon Dawson rushed for 170 yards and scored four touchdowns to lead the Panthers past Conrad 34-0 on Friday at Franklin Stadium.

Dawson scored his first touchdown midway through the first quarter on a 15-yard screen pass from Eddie Lwate. Those seven points were all Hillcrest needed, but Dawson was just getting started.

He had two touchdown runs in the third quarter, for 30 and 15 yards. The junior averaged nearly 10 yards per carry.

Leading 28-0 with nine minutes to play in the game, Dawson took a handoff at midfield and raced 50 yards for his fourth score of the night.

“The ground game was effective tonight — really the whole offense,” said Hillcrest head coach Andy Todd. “We were able to get some things untracked, and Trevor was a workhorse.”

While the offense was rolling, the defense was holding its own for the Panthers (3-5, 1-3).

During one stretch, Hillcrest forced four consecutive three-and-outs while holding Conrad (0-7, 0-3) to just 6 yards. The Panthers also forced three turnovers and posted their first shutout of the season.

“Our defense was amped tonight,” said Todd. “Making plays and creating turnovers, it was a good overall team effort.”

Meanwhile, the Chargers have scored just 26 points all season and were blanked for the third time.

Lwate threw for a touchdown and also ran for a score early in the third quarter. On second-and-8 at the Conrad 10-yard line, Lwate got to the outside and raced untouched into the end zone to give Hillcrest a 21-0 lead.

Lwate completed eight of 12 passes and accounted for 152 rushing yards on 22 attempts. The Panthers have a bye week before hosting another winless opponent, Thomas Jefferson, on Oct. 28. 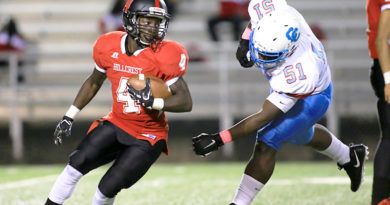