Hundreds gathered Tuesday morning at Bradfield Elementary for the dedication of Johnny’s Place, creating a tone that was more celebratory than sad.

Johnny’s Place is a memorial that has been in the works for months, dedicated to the memory of Johnny O’Leary, a second-grader who died of cancer last school year.

But the memorial doesn’t honor just one child. The design features one flowering tree surrounded by colorful, etched petals in the ground to remember not only Johnny but also Liberty and Faith Battaglia, who were killed by their father while attending Bradfield more than 10 years ago.

The colorful petals remind visitors to remember the joy of the children’s lives, and not the sadness of their deaths.

“Clearly, it takes a village,” Wallingford said. “There are so many people who have helped us.”

Everyone from the landscapers to the Highland Park Town Council to the school community and the families who donated were included in her comments.

“I want to read a poem that Johnny introduced to his family,” she said before starting to recite. “I hope that every time you read it, you’ll think of him.”

To end the occasion, third-graders sang “Hymn of Promise” before students, parents, and friends who had been holding onto purple balloons through the ceremony let go and watched them float off among the clouds. Loud “oohs” and “ahhs” could be heard from practically every child.

With the ceremony finished, students and teachers filed back in to continue the school day, but many remained to look at the new addition to the school’s landscape. A few grew quiet and embraced in long hugs.

Johnny’s parents, Stinelli and Tim O’Leary, did not speak during the ceremony, but left their remarks in the program: “Johnny’s Place will always be a special place for us as we continue in this journey of life through our son’s grace.” 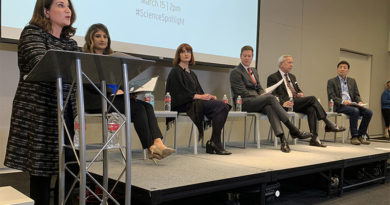 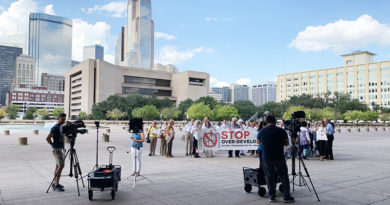 One thought on “Bradfield Elementary Dedicates Memorial to Deceased Students”