The Highland Park Lady Scots golf team overcame a three-stoke deficit to overtake Frisco Centennial and finish in second place at the Class 4A Region II Tournament on Tuesday at Denton’s Robson Ranch.

As a result, the Lady Scots will be heading back to Austin for the state tournament May 9-10. After winning their fourth state championship in 2008, Highland Park finished third at state the last two years.

Callie Scheffler led the way for Highland Park by shooting a 153 (79-74). She finished tied for sixth individually. All five of the Lady Scots shaved strokes off their first-round totals. 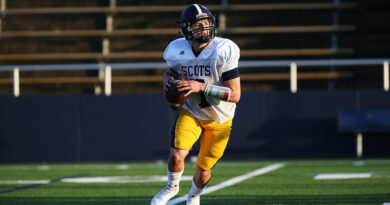 One thought on “Lady Scots Rally to Earn State Berth”