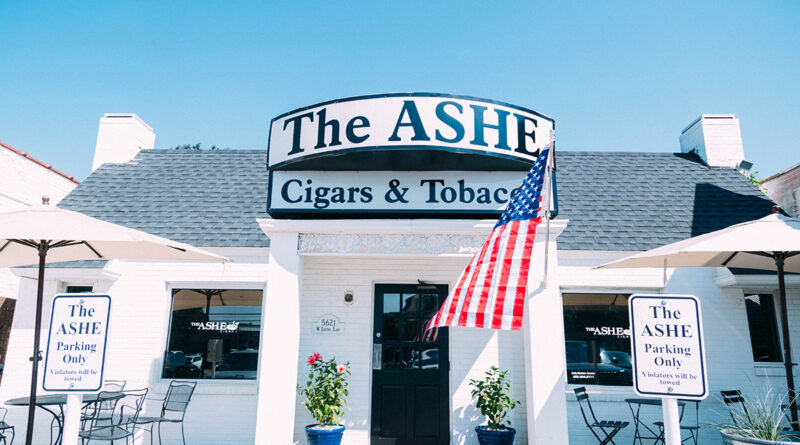 For over four years, The Ashe cigar and tobacco lounge has existed as a Park Cities and Lovers Lane fixture.

Just west of the Dallas North Tollway, this community of aficionados, executives, and average Joes regularly convenes to kick back in a club atmosphere, enjoying the simple pleasures of premium tobacco accented with periodic conversation.

Matt Proctor, a Dallas native and businessman, has been a member for several years. As an avid cigar smoker, he holds an affinity for the culture and camaraderie that cigar clubs inspire in the community. When he began noticing that the lounge was losing its luster, he couldn’t bear to let the business go up in smoke.

“When the club began to lose its energy, I got together with three other members, and we decided to invest and buy it so it would stay as part of the neighborhood community,” he said. “We purchased it with the intent to revamp everything. We brought in an expert tobacconist, and he’s been instrumental in handling our relationships with distributors and suppliers.”

The Ashe now carries around 300 varieties of cigars in-house, but they have access to over 2,000 through their extensive distributor network.

“We’re one of only 14 dealers that carries Atabey cigars,” Proctor said. “We carry a lot of really unique products like that. We also carry some really high-end Padróns, Fuentes, Opus, and things like that, but we run the spectrum of both high-end and affordable brands.”

Of course, the immense selection of tobacco is just one component of what makes this club. The Ashe serves as common ground for a diverse set of community members. Since it’s BYOB and open 24/7, members can always drop in, kick back, and light up. This makes it both a welcoming retreat and an excellent place to meet friends and make connections.

“We’re made up of a fairly mixed set of members from across the Park Cities community,” Proctor said. “We welcome everyone from ex-businessmen to current business owners, people connected to different local sports industries and beyond. We even have a young executive program, and that’s been great for younger folks to be able to network and get to know other older executives in the area. At the end of the day, we want everyone to come, relax and be stress-free.”