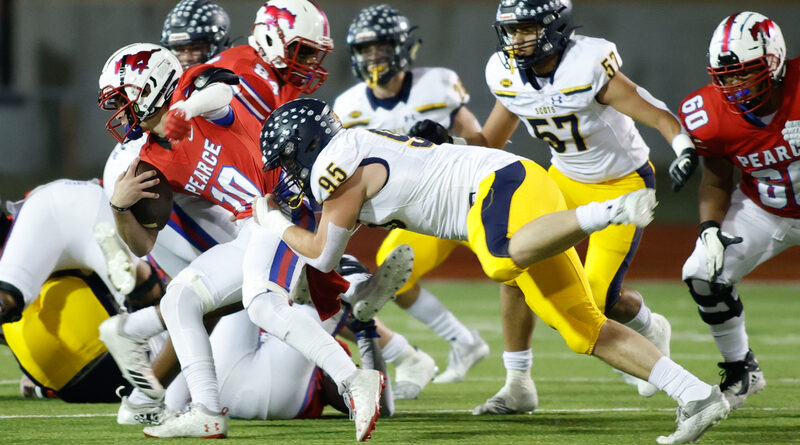 The Highland Park defense has been stellar during the past month before the playoffs. (PHOTO: Melissa Macatee)
Park Cities Sports
November 11, 2022November 11, 2022 Todd Jorgenson 0 Comments

In its first season back at the Class 6A level, Highland Park passed every test during the regular season. Now they’re ready to begin a playoff gauntlet in the Division II Region I bracket that includes multiple state championship contenders.

A showdown with fellow unbeaten Denton Guyer potentially looms in the second round. But first, the Scots will host Arlington Bowie in a bi-district matchup on Friday at Highlander Stadium.

HP won the regular-season title in District 7-6A behind a balanced offensive attack that averaged 44 points per game. Senior quarterback Brennan Storer, who is verbally committed to Western Michigan, has thrown for 2,353 yards with 28 touchdown passes and just one interception. He also has four rushing scores.

The Scots (10-0) have committed just three turnovers this season — including only one lost fumble — while forcing 14 opponent miscues for a plus-11 ratio.

Meanwhile, the HP defense has allowed just 33 points combined over the past five games. They haven’t surrendered an offensive touchdown in four straight contests.

The Scots, who rolled past Richardson Pearce 49-10 in the regular-season finale, haven’t been seriously challenged since a 35-28 win over Jesuit on Sept. 30. That’s because the five playoff teams HP defeated this year all came in the first six games.

After a four-game winning streak midway through the season, Bowie dropped three of its last four games, including a 62-12 thrashing by Arlington Martin a week ago.

The Volunteers (5-5) missed the playoffs in 2021 but bounced back with a fourth-place finish in District 8-6A this season. Experienced quarterback DeAngelo Ponder leads an offense that averages more than 35 points per game.

The last time the Scots competed at the 6A level during the 2014 and 2015 seasons, they defeated Irving Nimitz before falling to Waco Midway in the second round in both years.