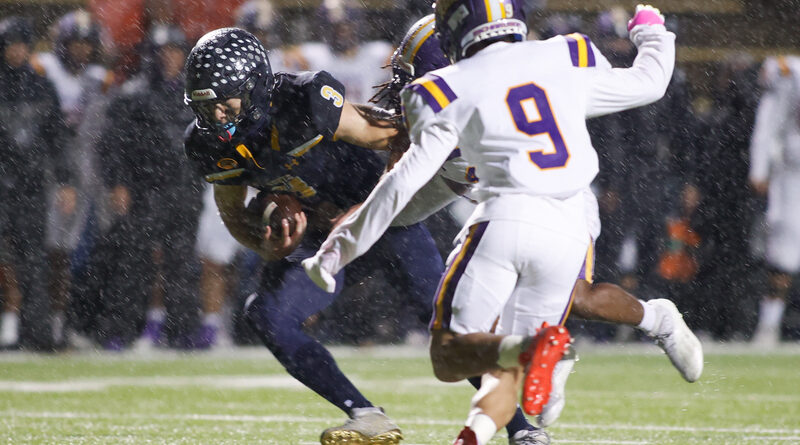 Highland Park will close the regular season against a familiar foe on Friday, hoping for a familiar result.

The Scots will travel to face Richardson Pearce at Eagle-Mustang Stadium, aiming to clinch their fourth unbeaten campaign (playoffs excluded) in the past six years and 22nd in program history.

HP already has secured the District 7-6A title and top seed in the Division II playoff bracket. The Scots (9-0, 7-0) will host Arlington Bowie next week in the bi-district round.

But first, they will look to continue their momentum against the Mustangs (4-5, 4-3), a team they have beaten consistently in several prior meetings over the past two decades.

Last week, HP earned its second shutout in a row and third this season with a 31-0 thrashing of Richardson. The Scots have outscored their last three opponents by a combined margin of 134-6.

Senior quarterback Brennan Storer, who is verbally committed to Western Michigan, needs just 35 passing yards to reach 2,000 yards for the season. He has 22 scoring passes with just one interception, and also has tallied four rushing touchdowns.

Jay Cox has rushed for 13 touchdowns for the Scots, while Grayson Schrank leads a balanced receiving corps with 32 catches and 499 yards.

Meanwhile, the HP defense has been especially strong in district play — not allowing a first-half touchdown since the 7-6A opener against Lake Highlands on Sept. 9. The Scots have surrendered only three points before halftime in their last six games combined.

Pearce will be motivated by its slim postseason hopes remaining intact after a 45-13 victory over Irving last week.

Consistency has been an issue for the Mustangs under first-year head coach Jarrett Lambert, although they do have some dangerous playmakers including sophomore quarterback Presley Harper, running back Ryan Williams, and receiver Caden Varner.