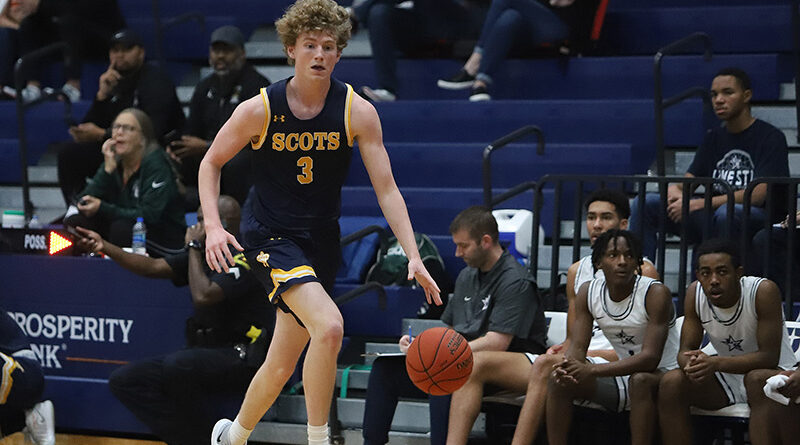 Luke Hardenburg has always had a versatile array of weapons in his on-court arsenal. As a senior, he’s finally able to use all of them.

As the Scots’ only returning starter this season, Hardenburg has transitioned from a role player into a clutch player on both ends of the floor.

“His contributions are very multifaceted for our team,” said HP head coach David Piehler. “He’s not as hesitant to shoot when he’s open. He’s also a defender and a rebounder. He won’t wow you with great athleticism, but he deceptively fills the stat sheet.”

The 6-foot-6 forward is playing his third season at the varsity level and has been eager to take over the responsibilities of teammates such as Jack Pease, Worthey Wiles, and Mitchell Carew — who led HP to the Class 5A Region II semifinals a year ago,

That means in addition to rebounding and defending in the paint, he’s being asked to shoot from the perimeter and even handle the ball.

“They’re putting the ball in my hands more. Plays are being run my way,” said Hardenburg, who has drawn interest from several college programs with elite academic and athletic reputations. “I want to show people that I can play every position and play it well.”

Hardenburg extended his shooting range during tournaments in the offseason while also emphasizing defensive agility against quicker guards.

He narrowly missed a triple-double in a November victory over Lewisville when he tallied 16 points, 10 rebounds, and nine assists. Two weeks later, Hardenburg punctuated a win over Jesuit with a steal and emphatic dunk in the final minutes.

As HP looks to defend its District 13-5A title throughout January and February, Hardenburg has emerged as a steady presence, both with his emotions and his play, on a squad that has balance and depth.

The senior said he has tried to mentor his younger teammates about playing critical roles — just like he did — while waiting for their time to shine.

“He is the elder statesman on our team in terms of experience,” Piehler said. “He’s matured a lot. He’s put in his time, and now he’s ready to be the leader.”