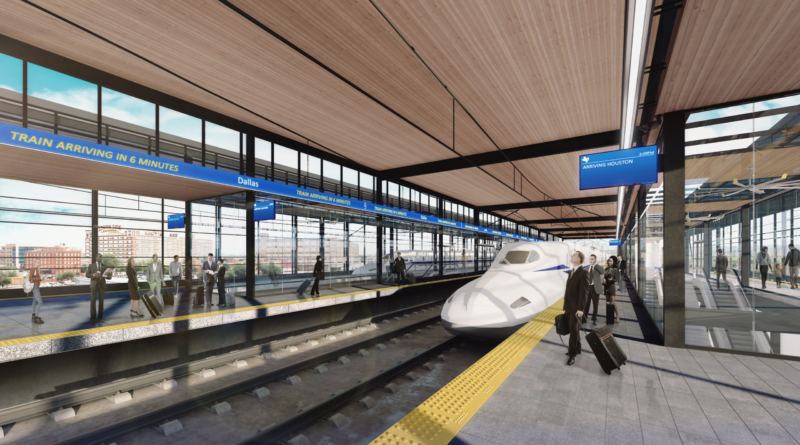 A rural Texas landowner is battling Texas Central in a lawsuit that hinges on whether the company can forcibly take parcels needed to connect the state’s two biggest urban areas.

By Alex Ura
The Texas Tribune

The Texas attorney general’s office has put its weight behind a landowner’s case against the companies developing a controversial Dallas-Houston bullet train, arguing they can’t force people to sell parcels needed for the high-speed rail project.

Weighing in on the matter at the invitation of the Texas Supreme Court, the attorney general’s office offered the latest twist in the nearly decade-long fight over a 240-mile line that would connect Dallas and Houston. While the project has picked up support from leaders of urban areas, it’s encountered hard resistance from residents of the rural counties on its proposed path.

One of those residents, Leon County landowner James Miles, sued Texas Central after the private company sought permission to survey his 600-acre property in 2015 as part of its efforts to examine the land for the project. Miles asked the courts to declare that the company did not have the right to enter his property because it does not have the eminent domain authority granted to railroad companies.

He won at a trial court, but the legal dispute reached the Texas Supreme Court after a state appellate court in Corpus Christi sided with Texas Central and a related company.

In a legal brief filed with the Texas Supreme Court on Friday, deputies for Texas Attorney General Ken Paxton argued the high court should reverse that appellate decision and rule in Miles’ favor because the companies fall short of the Texas Constitution’s definition of a rail company.

“The [companies] may only make preliminary examinations and surveys of private landowners’ properties for the purpose of constructing and operating a bullet train if they are either railroad companies or interurban electric railway companies,” the state wrote in its brief. “In the State’s view, the [companies] are neither.”

That leaves them with “no authority to enter, examine, survey or condemn Miles’ land,” the state wrote.

The state’s legal brief turns largely on the meaning of a portion of the state Transportation Code that gives private entities the ability to exercise eminent domain if they are “operating a railroad.” Reading at times as a semantic study in how to interpret tenses and grammar in state statute, the state said the companies could not be classified in that way because they “currently own no trains and have constructed no tracks or train depots.”

“The rules of grammar confirm that the Respondents are not railroad companies,” the AG’s office argued.

In the litigation, the companies have contended they meet that definition under the Transportation Code because they have performed the preliminary activities needed to construct a railroad, creating a reasonable probability that they would operate a railroad in the future.

The state also disagreed with the companies on this point, saying they could not show a likelihood of procuring sufficient financing to complete the project.

Texas Central representatives did not immediately respond to a request for comment. The company has previously promised to fund the project — at a cost around $20 billion — with the support of private investors and without public funds.

Company executives have previously said they would prefer not to use eminent domain “at all” and would rather work out amicable sales agreements for the thousands of parcels needed to construct the project across 10 counties. The company has also vowed to minimize how much the line will impact the land around it.

The high-speed rail project has been mired by setbacks and controversy for the better part of a decade. In both courthouses and at the Capitol, opponents have zeroed in on Texas Central’s claim that state law gives it the right to use eminent domain and force unwilling owners to sell their land.

The push for the Dallas-Houston bullet train has been built on its promise of establishing a line on which trains could run at speeds of up to 205 mph to cut a trip that would normally take four hours by car down to 90 minutes.

But securing the land along its proposed route has proven a challenge. In 2020, Texas Central said it had secured more than 600 parcels covering just about 40% of the lots — not the land — it needs for the project. Given fierce opposition to the project in rural areas, eminent domain is seen as likely to become a necessity at some point.

In Leon County, one proposal would bisect Miles’ 600 acres with a 100-foot right-of-way, according to the legal filings.

On Monday, opponents of the rail described the attorney general’s brief as a “strong show of support for Texas private property rights.”

“The brief filed by the [attorney general’s office] is clear that the past activities, corporate structure and financial state of the project coupled with the very high level of uncertainty that the project would ever even be built does not meet a threshold that would support Texas Central’s claim that it has eminent domain authority,” the group Texans Against High-Speed Rail said in a press release.

Disclosure: Texas Central has been a financial supporter of The Texas Tribune, a nonprofit, nonpartisan news organization that is funded in part by donations from members, foundations and corporate sponsors. Financial supporters play no role in the Tribune’s journalism. Find a complete list of them here.