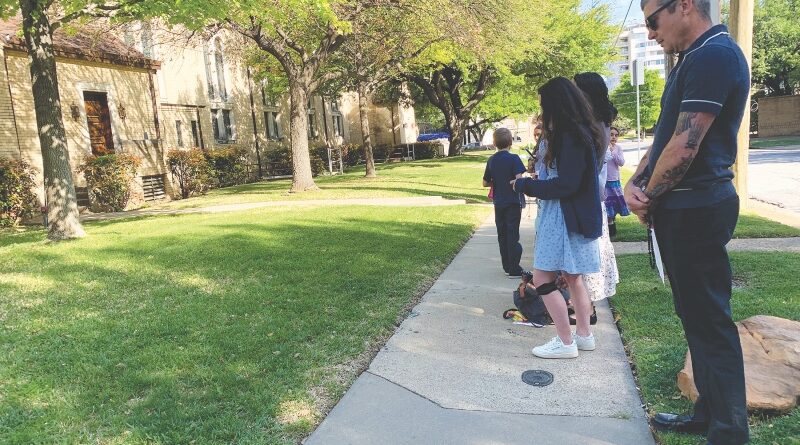 For all the social media furor, few attended planned protests at Holy Trinity Church, where police had removed a North Texas politician’s daughter after she refused to wear a mask at Mass.

And the 14 or so who showed seemingly preferred, in the words of the Gospels, to hide their lights “under bushel baskets.” They pointlessly demanded their photographs not be published (journalists don’t need permission to use images of protesters in public spaces) and refused to provide their names.

The maskless protestors, who said they typically attend other churches in the Roman Catholic Dioceses of Dallas and Fort Worth, gathered off Oak Lawn Avenue to pray while the Holy Trinity held Mass outside on April 10.

One woman called the removal of Deirdre Hairston from 5 p.m. Mass March 14 “unjust.”

Hairston, the daughter of former GOP state Sen. Don Huffines, went on at least two podcasts to talk about being approached by the Rev. Milton Ryan, the pastor of the Uptown Dallas parish, when she went to 5 p.m. Mass with her 1-year-old child.

She shared a video she took of the incident on the video podcast of Taylor Marshall, an advocate for traditionalist Catholicism and author of 2019’s Infiltration: The Plot to Destroy the Church from Within. She also appeared on former White House Chief Strategist Steve Bannon’s “War Room: Pandemic” podcast.

According to an incident report, Dallas Police officers arrived during Mass and gave Hairston a trespass warning.

“When RO’s (reporting officers) went into the location and made contact with the suspects,” the report said. “Suspect Deirdre, who was holding her infant, ignored RO’s directions to leave (the) location to talk outside.”

The Diocese of Dallas issued a statement two days after her interview was posted on YouTube.

“The pastor of the parish has required masks at Mass out of concern for the health and welfare of his entire congregation. Canon law grants pastors jurisdiction over their parishes, and while the bishop has not mandated masks for every parish, he has left these specific details to the pastors of the Diocese, adding that he expects the faithful to wear masks out of charity and concern for others,” the statement read.

Holy Trinity parishioner Kathy Palter said the church was “inundated” with emails and voicemails after the episode.

“It’s upsetting,” she said. “Of course, as we all know, everything is played out in public on social media, and I’ll tell you it feels helpless when a simple little Facebook page for your home parish, which probably gets one or two hits a day if it’s lucky, is suddenly blowing up with comments that are so hateful that you don’t even recognize the place where you attend and worship.”

2 thoughts on “Despite Online Kerfuffle, Few Protest At Holy Trinity”