There’s only three R’s! There’s not supposed to be a fourth for rehoming without permission. But before 5:04 p.m. Dec. 17, a rapscallion roamed by the Discount Tire store at Inwood Road and Lemmon Avenue and removed property of Liberty Tire Recycling of Midlothian.

Arrested at 2:11 p.m. at apartments on LBJ Freeway, near Preston Road: a 25-year-old man accused of having marijuana, heroin, and cocaine plus a handgun.

A “suspicious person” turned out to be a thief, stealing before 10:47 a.m. from a 79-year-old man living in the zero hundred block of Royal Way.

Before 1:45 p.m., a swindler tried to shop at Marshalls department store in Preston Center with a credit card stolen from a 28-year-old woman.

Also before 1:45 p.m., a burglar broke into and took contents from a 28-year-old woman’s vehicle at the Market at Preston Forest.

Before 8:50 p.m., a motoring menace made a 19-year-old Bryan woman’s visit to NorthPark Center miserably memorable by making a clean getaway after mashing her vehicle.

Overnight before 9:31 a.m., a burglar smashed a window while stealing from a 59-year-old man’s vehicle at a home in the 4400 block of Bluffview Boulevard.

Before 1:01 p.m., a burglar smashed the window of a 42-year-old man’s vehicle, grabbed the contents, and motored away from the 7-Eleven at Northwest Highway and Hillcrest Road.

Online records didn’t include a reporting times for a couple of thefts at the Summertree shopping center on Inwood Road and another at apartments on LBJ Freeway, near Preston Road. At the same apartments a nuisance stole the temporary plates off a vehicle before 6:53 p.m..

Before 7:01 p.m., an opportunistic prowler found easy pickings in an unlocked Crawford Services of Grand Prairie van while heating, ventilation, air conditioning technicians called on a home in the 6500 block of Northaven Road.

Want to send an invitation for thieves? Leave the vehicle unlocked like the 32-year-old woman who discovered her stuff taken before 8:10 p.m. at Preston Hollow Presbyterian Church on Preston Road.

Reported at 10:13 p.m.: A burglar smashed a window and grabbed the contents of a 32-year-old Fort Worth woman’s vehicle outside Inwood National Bank at Newmore Avenue and Inwood Road.

The reporting time was not provided for a theft at Lovers Lane United Methodist Church on Inwood Road.

Fixing it in a flash wasn’t quite fast enough for a Milestone crew to avoid having the window of the service van smashed before 2:53 p.m. outside a home in the 10000 block of Preston Road.

Reported at 4:45 p.m.: A burglar took a 41-year-old Dallas woman’s belongings from a Public Storage unit on Inwood Road near Lemmon Avenue. 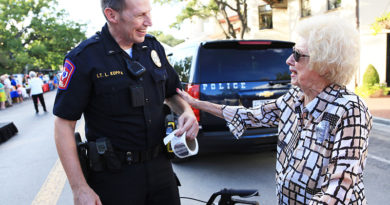