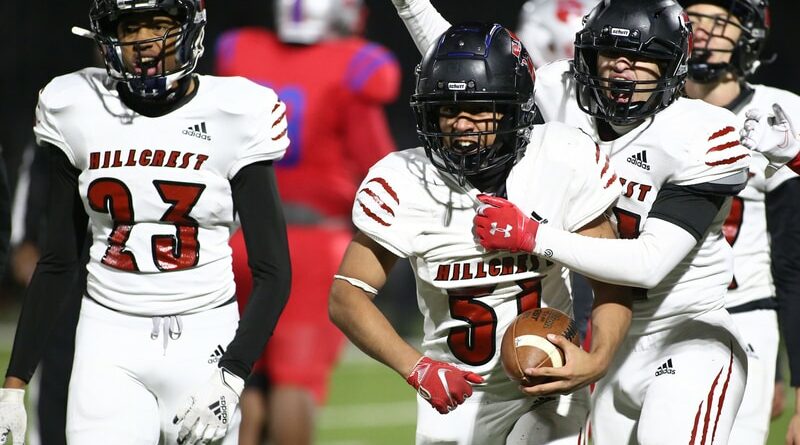 Hillcrest is excited to be back in the playoffs for the first time in six years. The Panthers will face Aledo on Thursday. (PHOTO: Chris McGathey)
Preston Hollow Sports
December 10, 2020December 9, 2020 Todd Jorgenson 0 Comments

In 2020, making the high school football playoffs requires beating your opponents on the field, and avoiding COVID-19 exposure off of it.

W.T. White and Hillcrest each validated that theory in ending lengthy postseason droughts. Both teams combined some timely wins with multiple forfeits — three for WTW, two for Hillcrest — in earning a top-four spot in the standings. However, that doesn’t diminish the significance of their accomplishments.

More importantly, neither the Longhorns nor the Panthers had to miss any games due to positive coronavirus tests like their district rivals.

Both have daunting tasks in the bi-district round on Thursday, as WTW will face powerhouse Frisco Lone Star in Class 5A Division I, while Hillcrest will travel to meet defending state champion Aledo in 5A Division II.

The Longhorns (6-4) placed third in District 6-5A Div. I to make the playoffs for the first time since 2007. They’ve also clinched the program’s first winning season since 2000, which coincided with the most recent WTW postseason victory.

After a couple of close losses early in the season, the Longhorns secured their playoff berth with a thrilling 22-20 win over Bryan Adams on Nov. 27. The program has been on an upward trajectory since going winless in 2017, finishing with one win, then four, and now six.

Meanwhile, the Panthers (6-4) wound up with the same regular-season record as a year ago, but this time were rewarded for their winning season. Hillcrest will make its first playoff appearance since 2014 after finishing fourth in 6-5A Div. II.

The Panthers dropped three straight games in October before turning their season around thanks to a resurgent offense and a more favorable schedule. Hillcrest’s best performances came on the road, during key victories against Seagoville on Nov. 6 and Spruce last week.

Hillcrest running back Nasir Reynolds, who has verbally committed to Drake, is one of the top 5A rushers in the Dallas area after accumulating more than 1,000 yards for the third consecutive season.