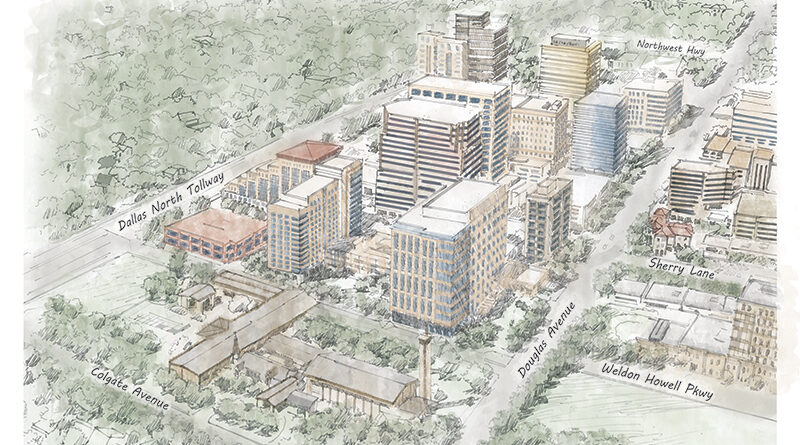 The Dallas City Council approved an ordinance granting planned development district zoning for a mixed-use development on the Saint Michael and All Angels Episcopal Church campus at the beginning of the year, and now the city Plan Commission will hear a request from the church to replat a 13.126-acre tract of land to create three lots ranging in size from 1.705 acres to 7.195 acres at its Oct. 15 meeting.

The church campus is on Colgate Avenue between Lomo Alto Drive and Douglas Avenue in the southwest part of Preston Center. A previous request to replat a 0.8710-acre tract into one lot on property located at the Dallas North Tollway and Sherry Lane was approved in September 2015.

The plans, announced in 2018, include an office building on Douglas Avenue, and a residential building on the western side of the site, as well as a restaurant and ground-floor retail that opens onto public green space along Douglas Avenue.

Saint Michael and development partner Lincoln Property Company considered a project on the same piece of land in 2015 but put those plans on hold pending the recommendations of the Northwest Highway and Preston Road Area Task Force led by Dallas City Councilmember Jennifer Gates.

According to paperwork filed with the commission, 51 notices regarding the new request were sent to property owners within 200 feet of the property on Sept. 29, 2020.

Individuals wishing to speak at a City Plan Commission meeting should contact the Sustainable Development and Construction Department at 214-670-4209 by 5 p.m. Tuesday. Public hearings are also streamed on Spectrum Cable Channel 96 or 99 and bit.ly/cityofdallastv or YouTube.com/CityofDallasCityHall. The public can also listen to the meeting by clicking here.

In other Plan Commission action, at its Oct. 1 meeting, the commission voted to take under advisement an application from Intercity Investment Properties,  (which owns the Shoppes on Lovers, Travis Walk, Terrace House, Miracle Mile Mall, Villa Del Norte, Westside Office, and Preston Pointe Centre) for a parking district on property zoned for single-family and multifamily, on the east line of Inwood Road, north of Lovers Lane.

According to documents submitted to the Plan Commission, the company planned to develop a parking lot for remote marking by their shopping center on Lovers Lane. The site is comprised of two lots that would allow for the development of a parking lot with 61 parking spaces to be used as excess parking.

However, the city staff has recommended that the commission deny the application, saying that the request does not align with the forwardDallas! Comprehensive plan adopted by the city.

The commission is set to take up the matter again on Nov. 5.