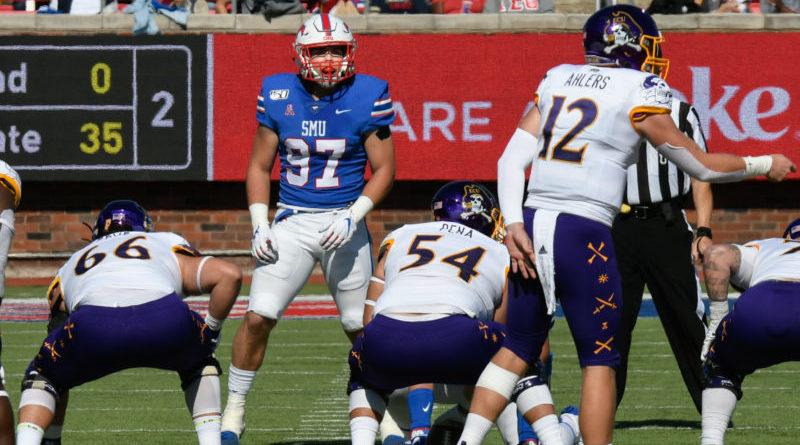 Given its proximity to his Park Cities home, SMU immediately was an attractive choice for Turner Coxe to play college football. But that’s not the only reason he chose the Mustangs.

The 2017 Highland Park graduate has emerged as one of the top defensive players during a breakthrough season for SMU, which enjoyed its first 10-win season since 1984 and will cap his sophomore campaign in the Boca Raton Bowl against Florida Atlantic at 2:30 p.m. on Dec. 21.

“It’s really cool to play here, obviously, because my family can come to games.” Turner Coxe

The Mustangs had been mired in an extended period of mediocrity when Coxe arrived on campus in 2017. The defensive lineman picked up some late recruiting interest after earning co-MVP honors during HP’s win over Temple in the Class 5A Division I state championship game in 2016.

He redshirted during his first year, in part to gain strength and agility, and watched as SMU reached the Frisco Bowl in 2017.

Coxe was recruited by the staff of former SMU head coach Chad Morris, the father of current HP quarterback Chandler Morris. However, Morris left for Arkansas before Coxe even played a snap for the Mustangs.

Nevertheless, Coxe emerged as a contributor as a redshirt freshman in 2018 under new head coach Sonny Dykes. After that season, in which the Mustangs finished 5-7, the defensive unit committed to extra offseason strength workouts.

“We put high expectations on this season as a team,” Coxe said. “We’re more confident. Everyone has kind of bought in.”

Coxe was an undersized nose tackle as a two-year starter for the Scots. He’s up to 250 pounds now, but is also more versatile, lining up as an outside linebacker and edge rusher, with some pass coverage responsibilities.

During the regular season, Coxe was seventh on the team with 41 tackles, including 6.5 tackles for loss. A personal highlight came during a road win over rival TCU in September when he had six tackles, a sack, and a forced fumble.

“We’ve been really successful this year, and now people are putting expectations on us,” Coxe said. “We just have to take that, keep moving forward, and continuing this success.”