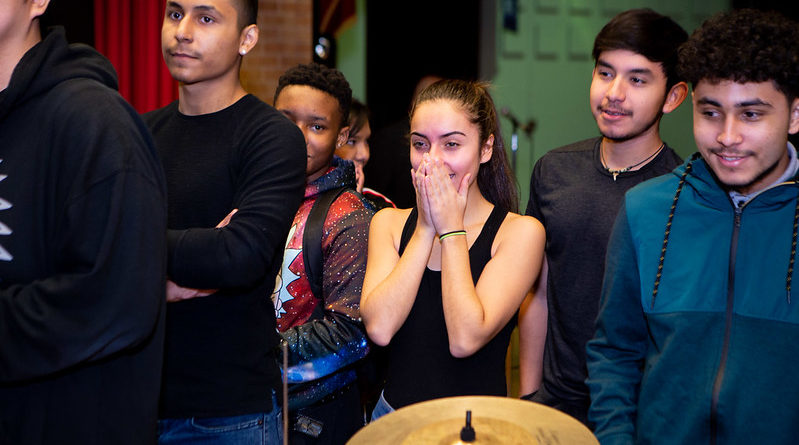 On Dec. 11, Thomas Jefferson students (who are currently attending school at the formerly shuttered Thomas A. Edison Middle Learning Center) gathered for the surprise instrument delivery made by Niagara Bottling employees. The event featured a performance by students from the Little Kids Rock program, and remarks by Timothy O Linley, executive director of Visual & Performing Arts at Dallas ISD, representatives from Niagara Bottling, and Janice Polizzotto, Chief Development Officer from Little Kids Rock.

Niagara Cares, the philanthropic arm of Niagara Bottling, and Little Kids Rock, a national nonprofit on a mission to transform lives by restoring, expanding, and innovating music education in schools across the country, brought 50 new instruments to the district after a tornado heavily damaged three schools.

The Dallas Independent School District sits in the heart of a large, diverse and dynamic region with a metropolitan population of 6.5 million people in the 12 counties in North Central Texas. The district is the second-largest public school district in the state, and the 14th-largest district in the nation. The school district serves 155,000 students in pre-kindergarten through 12th grade and employing nearly 20,000 dedicated professionals.

“We’re honored to partner with Little Kids Rock to further our impact in Dallas schools and support the need for musical instruments,” said Kristen Venick, director of Niagara Cares. “Our team members are grateful to be here and a part of this donation. We hope this will provide some joy to the students and staff while the schools recover from the tornado.”

Dallas ISD has 114 music teachers trained by Little Kids Rock with an empowered sense to build music programs reflecting the music that their students know and love.

With Niagara Cares’ contribution of instruments, the Dallas ISD music department begins the rebuild process in recovering their losses from the tornado.