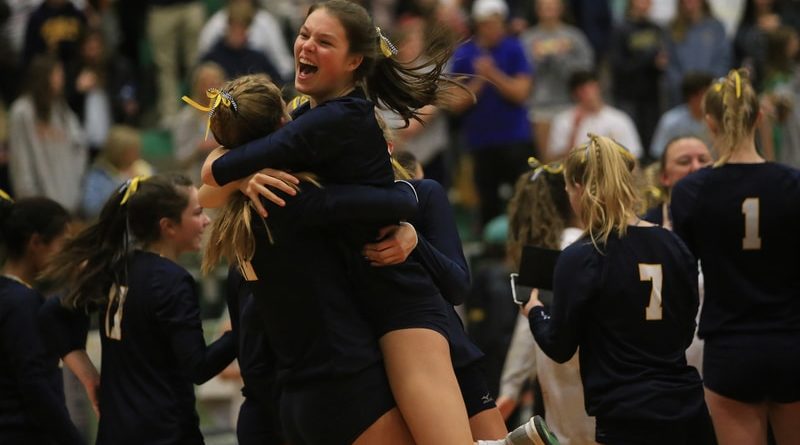 RICHARDSON — How does the Highland Park volleyball team celebrate a trip to the Class 5A Region II tournament?

Following Tuesday’s four-set victory over Frisco Lebanon Trail, the Lady Scots and a couple of fans showed off some dance skills.

“Honestly, getting a block is one of the most fun parts of the game,” said 6-foot-3 middle hitter Lauren McMahon, who accounted for five of HP’s 11 blocks. “It can really get into the head of a hitter.”

HP head coach Michael Dearman believes a block can mean much more than a single point.

“If a hitter gets blocked more than once, it came make them want to try something else,” he said. “It affects points down the road.”

McMahon is one of seven players on the Highland Park roster listed at 6 feet or taller. She said she works in tandem with a teammate to form a two-person wall and tries to jump at the same moment the opposing hitter leaves the floor.

“Getting a block gets a reaction from teammates like nothing else,” she said. “Getting blocked is the worst.”

The Lady Scots (37-11) will take a 23-match winning streak into a Region II semifinal against Midlothian at 5 p.m. Friday at Richardson Berkner. It will be the Lady Scots’ first regional tournament appearance 2015, when they were in Class 6A.

In only its second varsity season, Lebanon Trail (31-11) could not sustain its success in the first set despite big efforts from Ashia Dorsey (13 kills) and Rayna Williams (11 kills).

The second and third sets were very tight, but in both HP made the key shots.

“That shows mental toughness,” said Dearman. “That’s something we emphasize in practice.”

One area that concerned the coach was a nervous first set. “We played really tight and we didn’t play our game, but when the second game started and it was 0-0, we settled down and started over,” he said.

Lebanon Trail went on an 11-2 run to take the opening set. Providing the spark with the Blazers leading 14-13 was Lexi Abbey with a blind cross-court set leading to Peyton Thompson’s kill.

HP evened the match by clinging to a narrow advantage in the latter stages of the second set despite a rash of serve errors. Reaugh’s kill broke a 23-23 tie and McMahon finished it with a stuff block.

Lebanon Trail led by as many as five points early in the third set, but the Lady Scots rallied. On their second set point, a Reaugh blast ricocheted off the Blazer block for a 2-1 HP lead.

In the final set, Lebanon Trail built an early five-point lead, but the Lady Scots went ahead for good at 12-11 on a combined block by Nugent and McMahon.