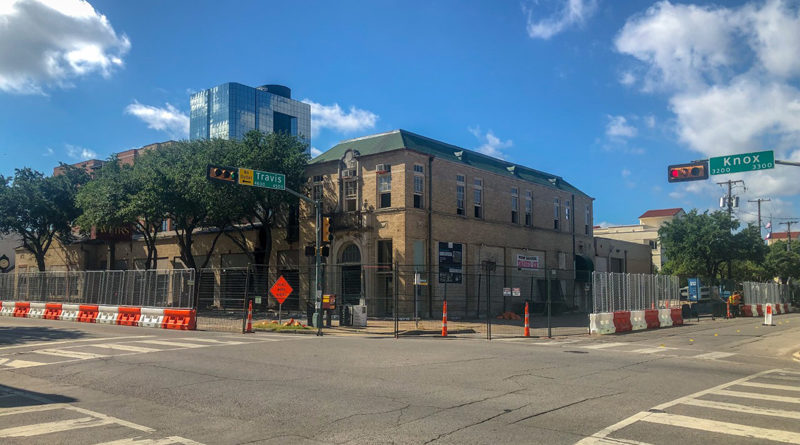 Park Cities and Dallas residents driving or walking around Knox-Henderson will certainly notice the construction surrounding Weir’s Plaza, which broke ground last week on a renovated mixed-use, 12-story retail and office development with Kirkland & Ellis as the anchor.

Above: The scene at Knox and Travis, near the Weir’s development. (Photo by Bianca R. Montes)

As construction unfolds over the next two years – the 12-story building is scheduled to open in November 2021 – pedestrians and drivers especially will be privy to safety measures being taken as the high-rise gets a makeover.

The sidewalks along Knox and Travis will be heavily enforced with scaffolding and other “thru-ways” that pedestrians can walk under. It’s not aesthetically pleasing, but it’s the city’s requirement to protect walkers from objects and other debris that could fall during construction.

That comes from a relatively new Dallas ordinance, which mandates that “anyone walking or working in or near a sidewalk” should still be able to traverse if private companies or city contractors are working in the area. In a pedestrian-friendly area like Knox-Henderson, this ordinance comes in handy.

Drivers may not be as lucky.

An entire traffic lane on Travis and Knox will be off-limits during construction, as the safety zone set up for pedestrians will spill out onto the road.

“Those [lanes] could remain closed for up to 24 months depending on construction progress,” said Roxana Rubio, Dallas public affairs officer. “Based on discussions with the private developers and their contractors, the sidewalk along Knox Street will be open by October, which may be subject to change based on ongoing weather conditions and construction challenges.”

“Once the private developers receive their permit to start their construction on their property, they will be required to apply for their right-of-way and traffic control permits from the Public Works Department,” she said. “The lane closures provide a safe buffer for traffic during ongoing construction.”

Last year, Weir’s Furniture and real estate firm Four Rivers Capital introduced their $150 million-plus plan to develop the retail and office tower without having figured out a construction date. Kirkland & Ellis will occupy the top three floors of the 12-story building and receive top-building signage.

Kirkland joins several other tenants in pre-leasing space in the building. WeWork has also signed a lease for 71,598 square feet and will take three floors of office space. Weir’s Furniture will occupy a portion of the first and second floors when the project is completed. The office space is currently 65 percent pre-leased, and the retail space in the building has received significant interest as well.

You Asked About the History of Abductions in the Park Cities

Park Cities Trivia Is Now Open for Those Who Can Remember