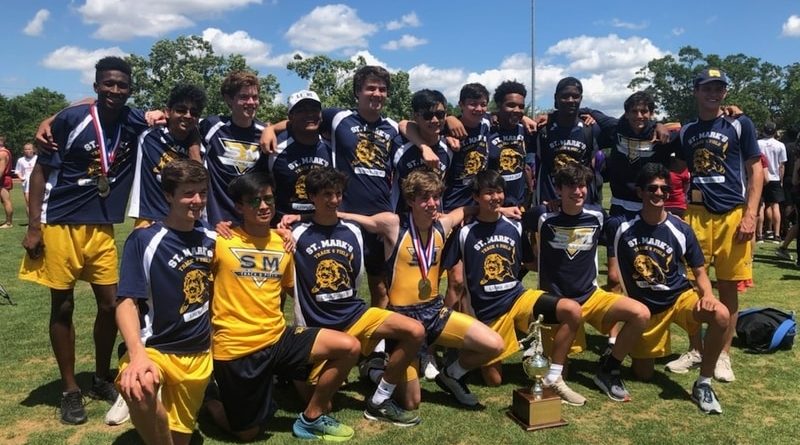 Thanks to several strong individual efforts, St. Mark’s was the runner-up in the boys team standings at the SPC track and field meet in Houston. Greenhill was the second-place girls team.

Olumu was the 100-meter champion in 12.25 seconds and also claimed a silver medal in the triple jump and bronze in the long jump. She also joined her Greenhill teammates on the podium as part of 4×100 and 4×400 relay teams.

St. Mark’s finished second in the boys team standings, while the Hornets were the runner-up on the girls side. The SPC spring championship meet also crowned top athletes in tennis, golf, baseball, softball, and lacrosse.

In boys action, St. Mark’s senior Seth Weprin won the 1,600 meters in a personal-record time of 4:22.91, narrowly defeating Casady standout Sam Bass at the finish line. Weprin also was part of a runner-up finish in the 4×800 relay.

Greenhill senior Jacob Herrscher was a double gold medalist in the 110 hurdles (15.15 seconds) and the pole vault. In the latter event, his meet-record height of 15 feet, 8 inches was more than two feet higher than any of his competitors.

St. Mark’s sophomore Kit Colson was second in the 200 and third in the 100. His junior teammate Pablo Arroyo finished second in the 800, while freshman Enoch Ennis took silver in the both the 110 hurdles and 300 hurdles.

After winning five events last year, Hockaday’s Adoette Vaughan capped her prolific high school career with gold in the 3,200 and silver in the 1,600.

Seeking its first championship since 2005, the ESD boys tennis team rolled through the first two rounds of tournament play. However, the Eagles stumbled against defending champion Houston Christian in the finals by a 3-2 score. St. Mark’s won the third-place match.

Hockaday suffered a similar fate in girls tennis, dropping a 3-2 decision to Kinkaid in the title match.

In girls lacrosse, ESD was the runner-up for the second consecutive year after suffering a heartbreaking 11-10 loss to Kinkaid in the championship game. Defending champion Hockaday won the third-place game.

On the golf course, ESD’s Mary Lou McMillan and Sofia Weinstein finished in the top 10 of the girls individual standings, along with Hockaday’s Julia Haetzel.

You Can’t Argue With Hockaday