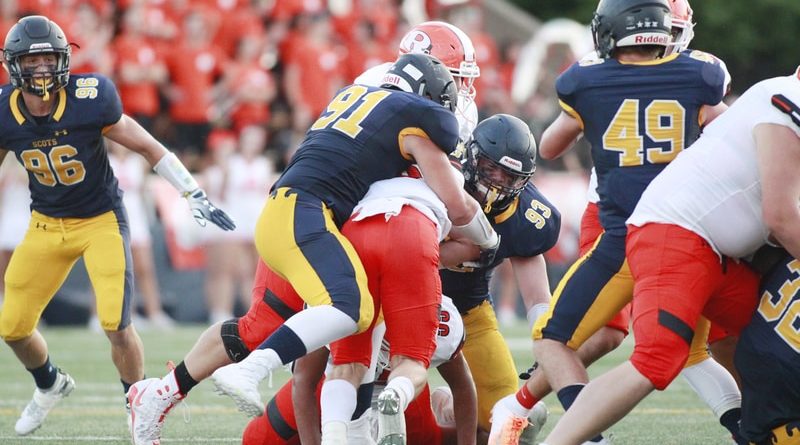 The Highland Park defense will look to stop its second straight Class 6A opponent when Mesquite Horn comes to town on Friday night. (Photo: Melissa Macatee)

Beginning the schedule with two consecutive home games might provide an advantage for Highland Park, but that doesn’t mean it’s easy.

After holding off Rockwall 49-42 in the season opener last week, the Scots will host another perennial Class 6A playoff team on Friday, when Mesquite Horn comes to Highlander Stadium.

As with the Yellowjackets, HP has some recent history with the Jaguars. The teams split a pair of games when they were 6A district rivals in 2014 and 2015.

The Scots (1-0) will aim to build on a promising debut, especially for junior quarterback Chandler Morris. In his first varsity start, Morris rushed for 105 yards and four touchdowns while throwing for 361 yards and two scores.

Drew Scott had both of the touchdowns, but Morris spread his 21 completions around to nine different receivers. Despite an abundance of new starters, the new HP offense looked a lot like the version that won the 5A Division I state title a year ago.

Meanwhile, Hudson Clark recorded two interceptions, one of which he returned for a touchdown, to lead a defense that toughened down the stretch after Rockwall surged ahead in the third quarter.

Horn certainly gets credit for ambitious scheduling. The Jaguars (0-1) will face their second straight defending state champion on the road after falling 40-0 last week at Allen.

It’s probably not fair to judge Horn based on the numbers from that game, when its high-powered offense was limited to 117 total yards by arguably the top team in Texas.

For example, the Scots know to prepare for dual-threat quarterback Jermaine Givens, who has verbally committed to Lamar, after he was limited to 59 rushing yards and 23 passing yards in the opener.

Givens is joined in the backfield by Esaias Taylor, while the aggressive defense includes playmakers Quavon Grant and Kendrick Blackshire.