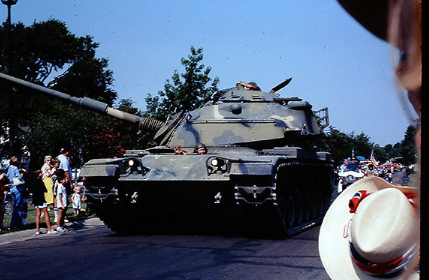 Kirk Dooley’s earliest Independence Day parade memory comes from the late 1950s, when he was 3 or 4 years old and his dad put him on a firetruck.

“I’ll never forget that,” Dooley said. Over the decades, he’s been a bicycle rider, organizer, grand marshal, and chronicler of the Park Cities Fourth of July Parade.

“It’s the single best day of the year in the Park Cities,” he said.

But that first memory was apparently made during one of the smaller, neighborhood-organized predecessors of the two-municipality parade and picnic known today.

One parade went from the Highland Park fire station to Highland Park Village. Another concluded at Caruth Park. There may have been others.

“At some point the leaders of Highland Park and University Park said, ‘Let’s do one parade together,’” Dooley said.

Decades-old newspaper clippings on file at the Highland Park Library disagree about the year of that first one from the town to Goar Park.

They put the beginning somewhere between the early and mid-1960s, but 1963 was cited by authors Diane Galloway and Kathy Matthews in The Park Cities: A Walkers Guide and Brief History.

That timing fits recollections of University Park resident Mary Katherine Maddox, who, like Dooley, would go from spectator to participant, volunteering in various roles from organizer to float judge.

Maddox, Galloway, and Matthews credit Park Cities Jaycees with starting the joint parade, which would later be run by a civic committee, the Exchange Club, and, since 2003, the Rotary Club of Park Cities.

The parade and patriotic picnic have grown from primarily a bicycling affair to include a variety of neighborhood floats, vintage cars, businesses, and dignitaries for an event that University Park Mayor Olin Lane sees as unifying for the Park Cities.

Galloway and Matthews describe it as hundreds of residents “on crepe-paper-strewn floats and bicycles, trucks and even tanks, in strollers, on skates, and on foot.”

“He’d react to the crowd, and they’d cheer, and he would do a little donut and that would tear up all kinds of pavement,” Fant said.

The next year Fant told him, “Either refit it or you put up a $10,000 bond for the damage.”
Gough “decided to take his tank and go home,” Fant recalled.

Fant also had to police Super Soaker water guns, because people getting sprayed on the parade route would flee, sometimes tripping and injuring themselves.

But his primary role was as a traffic cop getting the parade started.

Afterward, he would go and sit with Margaret McDermott, the Dallas philanthropist who died in May at 106.

“She very much treasured that the beginning of that parade started at her driveway,” Fant said.