Katie Smythe, Sophia Stener, and Autumn Neurohr have already finished their AP biology classes, but that doesn’t mean they’re taking a break from such studies.

This semester, the three Episcopal School of Dallas seniors are researching the potential impact that algae could have on the environment, particularly as an energy source.

“Algae is up and coming in renewable energy,” Smythe said as the girls measured algae they were growing in old plastic soda bottles.

Algae is small, plantlike organisms that live in water and use sunlight, carbon dioxide, water, and nutrients to produce both energy and oxygen. Because it grows in large amounts and produces an oil that can be converted into fuel, it represents a possible source of energy that researchers believe might help meet growing worldwide demand.

“There’s a lot of CO2 (carbon dioxide) in the atmosphere, which is causing the greenhouse effect,” Stener said. “And the point of algae is to convert CO2 into oxygen, so if you put the algae in areas where there are large amounts of CO2 it can help reduce the global warming effect.”

The girls learned about the benefits of algae from one of their teachers who’d seen an article about people creating algae lamps. The environmentally conscious girls were hooked.

They are working on two projects with algae. The first is similar to the researchers their teacher told them about.

It focuses around creating an algae lamp that could harness the energy of the process of photosynthesis to power a light. This lamp, which could be placed in parking lots, will absorb carbon dioxide and emissions cars produce around campus.

The girls plan to have a prototype by the end of the year to pass on so future engineering classes can continue the project.

The other is an algae chain where they’ve placed equal amounts of algae in four different jars. The jars are connected via tubes, and as algae convert carbon dioxide in the first jar into oxygen, they’re monitoring the levels decrease in the subsequent jars.

The project will be used to demonstrate how algae work for the upcoming lower and middle school so that younger students can become environmentally aware. The girls call it their legacy.

The work being done by the girls – and other students at the north Dallas school – is part of a post-AP class created last year, Science Department head Amy Henderson said.

“I feel like this group has been driven from the very beginning,” Henderson said. “They dove right into the classroom, and into getting the lower school interested in science, and really bridging that gap between the current levels that we have at ESD, and really fostering that relationship between the middle and upper classes.”

Youngsters Take Love of Gaming to Next Level 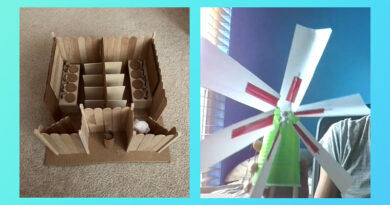