On Oct. 23, current and past chairs of the Trains at NorthPark gathered at the home of Alan Engstrom for a 30th Anniversary Luncheon honoring those that made the annual holiday event possible over the past three decades. Trains at NorthPark benefits the Ronald McDonald House of Dallas (RMHD).

Engstrom chaired the first Trains at NorthPark in 1987 with Debbie Raynor, alongside founder Ban Bywaters, who was in attendance with his wife, Kathleen. The original Kid Conductor, Amy Maggard, was also on-hand with a scrapbook made during her 1987 stay at RMHD.

This year’s Honorary Chairs are Dr. Dale Fuller and his wife, Jean Fuller. Dr. Fuller, a radiation oncologist, is a long-time supporter and founding board member of RMHD, which has provided a home away from home since 1981 for families of seriously ill or injured children seeking treatment at Dallas hospitals.

The 2017 co-chairs for the Trains at NorthPark are Hollee Hirzel and Bridget Miller. Jamie Singer chaired the luncheon.

Tickets for The Trains at NorthPark are $4 for children ages 2-12 and seniors over 65. Adult tickets are $7, while children under 2 are admitted for free.

The exhibit closes for Christmas and Thanksgiving, also closing early at 4 p.m. for both Christmas Eve and New Year’s Eve.

Those interested in supporting The Trains at NorthPark through sponsorship, volunteering, or purchasing a railcar can do so by visiting thetrainsatnorthpark.com, or contacting Janie Robertson at [email protected]. 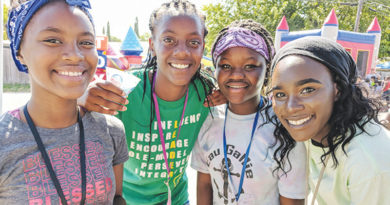