Maybe Jesuit should change jerseys at halftime more often. Whatever the reason, the Rangers are finally in the win column on the first weekend of October.

Jesuit pulled away from Richardson for a 56-34 victory at Postell Stadium on Friday, in a game during which the Rangers rushed for 361 yards, committed 135 yards in penalties, and sported a two-toned uniform for the second half.

Aside from that weirdness, E.J. Smith rushed for 166 yards and five touchdowns to propel an offense that was efficient and productive all night. Meanwhile, Jack Barton intercepted two passes to boost a Jesuit defense that limited Richardson to just six points after halftime.

The Rangers (1-4, 1-1), whose first four opponents have lost a combined three games all season, hope Friday’s result will provide momentum for a run to a playoff spot during the second half of the season.

“I love the way we look going forward,” said Jesuit head coach Brandon Hickman. “We had some guys step up tonight and play really well.”

Under a new UIL rule that took effect this season, Jesuit was docked two timeouts in the first half for wearing dark gray jerseys with dark blue numerals that were difficult to discern from a distance.

After halftime, the Rangers complied by wearing navy blue jerseys with gold numerals and gray pants, which made for an odd look, but they didn’t seem to mind. After all, Jesuit outscored the Eagles (0-5, 0-2) by a 28-6 margin with the new wardrobe.

“The kids stepped up in the second half,” Hickman said. “Maybe it was the mojo of the blue jerseys.”

Smith — a sophomore son of NFL legend Emmitt Smith — found the end zone three times in the second half, when the Rangers took control after being tied 28-28 at the break.

Hank Clements added 124 rushing yards and a score to key a resurgent ground game for the Rangers. Parker Towns threw a touchdown pass and ran for another score as Jesuit reached the end one on six of its first seven offensive possessions.

“It was a great one-two punch,” Hickman said of Smith and Clements. “The wind was pretty heavy on the field, so I tried to simplify the game plan and pound it on the ground.”

Two fumbles on kickoff returns by the Rangers led to a pair of first-half touchdowns for the Eagles, including on the opening possession of the game.

Richardson also scored 14 points in a span of 18 seconds late in the second quarter, with a muffed kickoff sandwiched between two Logan Sawyer touchdown passes. Sawyer’s 10-yard strike to Stone Carter evened the score at 28 and gave the Eagles momentum.

However, the Rangers settled down after halftime. Smith capped the first two Jesuit possessions of the third quarter with scoring runs of 35 and 17 yards.

When Richardson threatened again, Jesuit put together its most impressive drive of the game — going 89 yards in 13 plays, capped by a 15-yard scoring toss from Towns to Nick Hafertepe.

Towns completed 13 of 18 passes for a modest 129 yards. Matthew Priddy was his top target with six catches for 73 yards.

Sawyer threw for 230 yards and three touchdowns for the Eagles, who have lost 20 consecutive games dating to the middle of the 2015 season. They will host winless W.T. White next week.

Jesuit, which won its final seven regular-season games a year ago, will look to continue a similar run when it travels to face Skyline on Oct. 12. 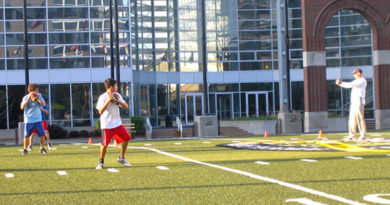 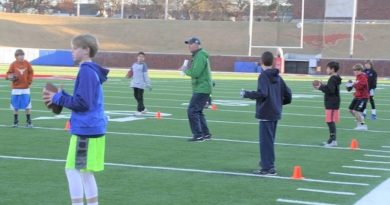