Home to team owners and corporate CEOs, west Preston Hollow boasted a presidential reputation before the Bushes “retired” to their gated cul-de-sac and entered a new phase of public service.

But as prestigious as an address in the estate area known as “the honey pot” can be, 10141 Daria Place just isn’t 1600 Pennsylvania Ave., nor even Austin’s 1010 Colorado St.

“Life in the White House is pretty nice,” Laura Bush reminisced with Cherie Blair during a program this spring on the roles of first ladies. “It’s hard to live without a chef.”

Visitors can try those oatmeal chocolate chip cookies at Café 43 in the George W. Bush Presidential Center at SMU, she added.

The Bushes’ 8,500-square-foot home is barely more than a 5-mile drive to the Bush Center, where the 71-year-olds spend time advancing such causes as international health, women’s rights, leadership, and freedom.

Laura Bush spends time there, too, and much of the work of the George W. Bush Institute relates to interests she developed as first lady.

This spring, the Institute released A Role Without a Rulebook: The Influence and Leadership of Global First Ladies. The report looks at the expanding roles of first ladies, as well as challenges they face in leveraging the platforms that come as spouses of heads of state.

The Institute also completed its third Liberty and Leadership Forum, a yearlong program aimed at equipping young Burmese adults to guide their nation through its transition to democracy.

“We believe that deep in everybody’s soul is the desire to be free,” the former president told those attending a June 26 graduation ceremony.

Nine years ago, Laura Bush traveled with daughter Barbara to a refugee camp, and remains a cheerleader for the Burmese people’s efforts to emerge from conflict and into democracy.

“Really, you are the hope,” Laura Bush told the 20 newest graduates. “You are the ones who can build what you need to really have a free Burma.”

Among the latest graduates: a sitting member of the Burmese Parliament, a Muslim advocate for human rights, and a BBC journalist.

The former first lady, who is also a former teacher and librarian, talked about the importance education could play in Burma’s future.

“Obviously, education is one of the most important things anyone can do … any government can do for their people,” she said. “People who are educated are more likely to be able to accept people who are different than them.” 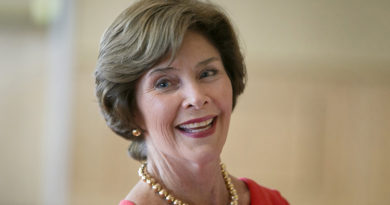