The University Park City Council approved final details of Highland Park ISD’s plan to relocate the Seay Tennis Center to Glenwick Lane near the high school student-parking garage. The project is the first of several proposed by the district to create more classroom space at the school.

HPISD chief of staff John Dahlander thanked UP officials during the March 7 City Council meeting for their patience and diligence.

“Because of their efforts and willingness to work with us, we think we’ll have better facilities in the long run that will be in the best interest of both students and neighbors alike,” Dahlander said. “We count ourselves very fortunate to have a strong relationship with the city of University Park.”

In November 2015, Park Cities voters approved a $361.4 million-dollar bond package. Of this, approximately $113 million has been allocated to high school improvements with a primary goal of alleviating overcrowding and adding academic space contiguous to the building.
In 1969, school officials converted the old on-campus gymnasium into the present-day natatorium. Today, it is the only part of the main high school building dedicated to athletics.
Relocating the 9,800-square-foot swim facility will free-up room for more than 20 classrooms as well as two to three labs.
A proposed addition to the northwest side of the building is expected to add close to 30 additional classrooms. Jonathan Aldis of Stantec architecture, the firm designing the new facilities, said plans for the new wing will likely be presented to council within the next three to four months.
District officials identified the Seay Tennis Center’s location on Grassmere Lane as the best place for the new aquatics center. The site is centrally located in relation to the other athletic facilities near Highlander Stadium. The new center will also feature weight rooms and administrative offices. Work on the facility is expected to begin once the tennis center relocation is complete. All construction at the high school is expected to be completed by 2020.
During the same March 7 meeting, council members also unanimously approved the final design of the new University Park Elementary school. The building will retain the school’s familiar tan façade, and make room for more outdoor activity areas.
HPISD is building its first new elementary school since 1948. That building is expected to be ready in time for next school year (see photos on Page 22). University Park Elementary students will temporarily attend classes there while their new facility is built. Once it is finished, students from Hyer Elementary, and then Bradfield Elementary will temporarily attend classes at the new building while their schools are rebuilt.

UP Students Donate Bikes After Rodeo 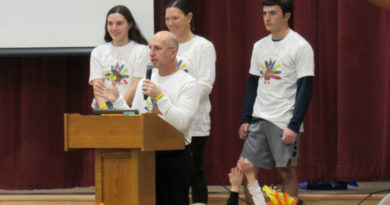