Highland Park made an early statement in District 15-5A on Friday, fighting back from an early deficit to post a 40-32 win over red-hot Lovejoy in the league opener.

“Their zone left some space open on the perimeter,” said HP head coach Nicole Fleming. “We made some adjustments after the first quarter and knocked down some key shots in the second half.”

HP continued its solid shooting in the third quarter. Behind the hot hand of SMU signee Morgan Smith, the Lady Scots took a double-digit lead. Smith’s 12 points led all scorers, and she also led her team with six assists.

“We knew Lovejoy had won 11 games in row and were capable of knocking down perimeter shots, so we had to close out,” Fleming said.

But Smith’s short jumper in the lane extended the HP advantage, and down the stretch the Lady Scots were able to knock down their free throws when the Leopards were forced to foul.

The Lady Scots will continue district play with road games at North Forney on Dec. 16 and West Mesquite on Dec. 20 before a holiday break.

Wasserman Named MVP in 15-5A 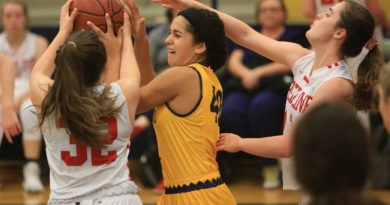