Behind a stingy defense and a bit of trickery, Jesuit rolled past Garland Naaman Forest 32-6 in a Class 6A Region II bi-district playoff game on Friday at Postell Stadium.

With its eighth consecutive win overall, Jesuit advances to play Tyler John Tyler in the area round at 2 p.m. on Nov. 19 at Mesquite Memorial Stadium. Jesuit has won five consecutive bi-district games.

Naaman Forest did not record a first down until midway through the third quarter, and was held to 103 total yards.

“Our defense was outstanding,” said Jesuit head coach Brandon Hickman. “We shut them down, which allowed our offense some breathing room all night.”

The Jesuit offense, which surpassed 40 points in each of its seven victories en route to the District 9-6A title, struggled at times against Naaman Forest.

Jacob Palisch found Connor Jackson from 10 yards out to put Jesuit up 7-0 on the game’s opening drive.

Jesuit (8-3) added to the lead when Israel Ollarzabal kicked field goals of 22 and 27 yards to make the score 13-0 early in the second quarter. The junior kicker booted three field goals in the game, and now has made 12 in a row.

“It wasn’t a particularly great night for our offense,” said Hickman.  “But with the way our defense was playing, and Ollarzabal’s kicking, we made it work.”

Naaman Forest (5-6) cut into the deficit at the 5:56 mark of the third quarter when Daviciea McCartney connected with Thomas Gutierrez for a 9-yard touchdown pass to make it 20-6.

That’s when Hickman called for some razzle-dazzle. With just under three minutes left in the third quarter, John Wunderlick took a pitch from Palisch and threw a 64-yard touchdown pass to Alek McGlone to put Jesuit on top 27-6. Wunderlick led all receivers with 72 yards on six receptions.

Jesuit’s Evan Jackson rushed for 101 yards on 23 carries, and Palisch threw for 162 yards and a score while also rushing for a second-quarter touchdown.

Meanwhile, the Jesuit defense got on the board with 54 seconds left in the third quarter when it forced a safety to go up 29-6.

“The beginning of the season, we felt like we let our offense down,” said Jesuit defensive tackle Matt Metz. “But since our 0-3 start, we’ve had some momentum on defense, and I think that showed tonight.”

Jesuit held Naaman Forest to five first downs and less than 2 yards per carry on the ground, while also allowing just 49 yards through the air.

Palisch Earns MVP Honor in 9-6A 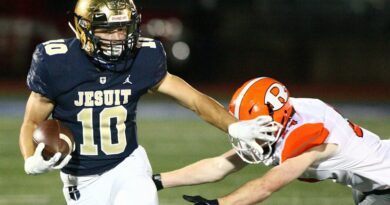