Mockingbird Lane drivers can expect periodic delays over the next few months as crews begin construction on a new cantilever cable pedestrian bridge that will connect the Katy Trail to Mockingbird Station, and eventually, points beyond as part of the Dallas Trail Network Plan.

The bridge required a unique design because it will run directly over the DART train tunnel that connects Mockingbird Station and Cityplace. The new span will consist of three towers: one on each side of the road and a third inside the station parking lot.

A second smaller bridge will be built over the rail line near Twin Sixties Drive.

Work on the bridge began in 2015 when crews installed monitoring equipment to test the effects of vibration on the subterranean line.

“We have to be very sensitive,” said Chiamin Korngiebel, senior program manager with the Dallas public works department. “Any construction will cause vibration.”

Crews have begun drilling micropiles (small bundles of steel tubes) into the ground on the north side of the road. The city of Dallas procured the steel from sites in Germany, as well as Houston. Once the towers are in place, construction can begin on the bridge span itself.

“It’s kind of like building a lego,” Korngiebel said.


In order to minimize the impact on locals, the city will try and limit works on nights and weekends when there is more traffic. The city also plans to install a webcam from a nearby building so residents can track the progress.

“We have a commitment to adjacent property owners and SMU,” Korngiebel said. “We are going to try and accommodate their schedule.”

According to Korngiebel, the city has set April 2017 as the target completion date. However, weather and other factors could cause that date to change.

Plans call for the Katy Trail to continue northeast from the station to the Ridgewood trail, creating a continuous link from the American Airlines Center all the way to White Rock DART station and the White Rock Creek Greenbelt Trail.

“I hate the fact that it just stops right here,” said North Dallas resident Norma Alexander, who takes daily walks along the trail.

The east-west route traverses the heart of Preston Hollow before ending near the Dallas North Tollroad. Designs are being drafted of a westward expansion that will eventually take the trail past Webb Chapel Road. According to Dallas Park Planning and Acquisitions Manager Jason Ney, the project could go before city council as part of a 2017 bond program. If passed, construction would start early 2018.

“I hope they get something done. I wish it had happened years ago,” Alexander said. 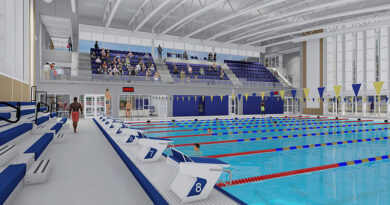