Richard Lentz has always been fascinated by dachshunds.

So it makes sense that his first children’s book, Life’s Little Lessons By Roo, More Than Just a Dachshund follows his 7-year-old, brown, long-haired dachshund named Roo through life’s challenges — relating the dilemmas facing the diminutive dog to his young human counterparts.

Roo’s adventures and trials are divided up into chapters, including a chapter entitled “Sad Times” in which Roo deals with the death of a close friend.

“I wanted something a child could read and go through life and say ‘If Roo can do this, I can do this,’” said Lentz, who has owned a landscape lighting company for almost 30 years.

The Preston Hollow resident hatched the idea while browsing a bookstore during a vacation in Charleston, S.C., where the lack of children’s books about dachshunds caused him to tap into his love for creative writing.

He wrote the book three years ago, but it took him a while to find the right illustrator. In order to make the artwork in the book colorful and engaging, illustrator Jack Unruh “played with Roo to help with the characterization of his illustrations,” said Lentz.

Roo always sat next to Lentz while he was working on the book, and also listened in during all meetings with the publisher.

“It was like he was aware of what was going on throughout the process,” said Lentz.

Roo even has his own Twitter account, @RooLentz, which was the brainchild of Lentz’s wife, Annette, a public relations manager, who figured the account could help create awareness for the book. Photos of Roo and his thoughts are frequently posted.

Heidi, Roo’s younger sister, also makes an appearance in the book. If he writes a sequel, Lentz said, “Heidi is a larger character in the second book.”

The book was published in December and is now available at retailers and at rooslittlelessons.com, with a portion of the proceeds benefiting various dachshund charities. 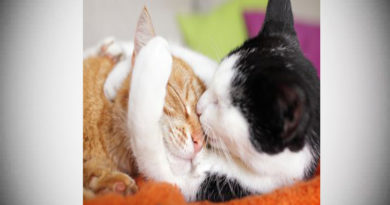 Take Cues From Your Cat