Last year’s matchup between Highland Park and Mesquite Horn essentially decided the District 10-6A title, which went to the Jaguars.

With both teams again tied, tonight’s rematch at Highlander Stadium could have the same impact on the league standings this season.

HP will have plenty of motivation from last year’s loss, of course, but the Scots (4-1, 2-0) also carry some momentum following a 76-35 thrashing of Richardson Pearce last week.

As the Scots offense was enjoying its most productive game of the season, the defense bounced back after a lackluster first half to shut out Pearce after halftime.

After having their 84-game home winning streak snapped by Pulaski Academy on Sept. 4, the Scots rallied past North Mesquite 28-27 on Sept. 25 in the district opener in their only other home game thus far.

The Jaguars (3-2, 2-0) have faced a similarly inconsistent roller-coaster ride that included dropping their first two games (one of those by forfeit against Duncanville for using an ineligible player).

Then Horn found its footing with close wins over Rockwall and Mesquite, followed by a blowout victory over Richardson Berkner last week.

In that 63-30 triumph, Horn dual-threat quarterback Chris Robison had his best game of the year with five first-half touchdown passes, including three to Katrell Blakely in a four-minute span in the second quarter.

The key for the Scots might be containing the size and speed on the Horn roster, something it struggled to do in last season’s 42-27 loss. After all, there’s a reason that Jarrison Stewart, who scored four touchdowns in that game, is now playing as a true freshman at TCU.

At any rate, Lake Highlands also part of a three-way tie for the district lead. The Wildcats play at Richardson tonight before hosting the Scots next week. 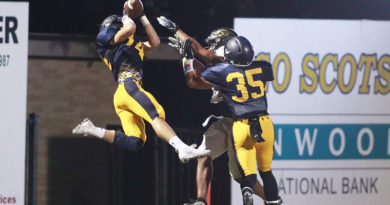 Gottsacker Will Be Preferred Walk-On at Texas