In their first trip to the state soccer tournament, the Lady Wildcats jumped on the defending Class 4A state champions and held on for a 2-1 victory on Saturday afternoon at Brikelbach Field. The loss was the first in 50 games for the Lady Scots (25-1-5).

“We were down two-nil at halftime, and we talked about coming out and playing for 40 minutes and just seeing what happened,” Highland Park head coach Stewart Brown said. “Every single one of the girls walked off the field very proud — not just from this game, but for an absolutely fantastic season they had. They’re just a really great group of girls. There’s more than winning a soccer game that they got out of this year.”

After missing the playoffs in Class 5A last season, Guyer (28-1-0) denied Highland Park its sixth state championship with a balanced attack. Sophomore Brittany Crabtree started things off by booting the ball past Lady Scots keeper Sarah Howley on a one-on-one in the 14th minute. Despite several ensuing scoring chances for Highland Park, championship game Most Valuable Player Hannah Alspach, a junior, rocketed a shot in from 25 yards out in the 33rd minute to give Guyer a 2-0 lead.

“We knew they had been here before and wanted it,” Crabtree said. “There was a lot of talk, I guess, that we were the underdog coming into this. The underdog has nothing to lose. We knew if we came out here and played our best, we could do it. We were a team and a complete family. We just kind of ran on that.”

Highland Park got right back into the game when senior Katie Martin fluttered in a harmless-looking shot from 30 yards out less than four minutes into the second half to cut the lead in half. The goal was the 40th of the season for the Villanova signee, who finished with 39 goals last season.

“Obviously our goal was to get another state title,” Martin said, “but once the final whistle blew and the game was over, I was a little bit too content. Our team gave everything it had this year. This was the only game we lost all year. … Over the past few years, the program has developed. I’m just so happy to leave it the way it is now.”

And while Highland Park reversed the momentum on Martin’s goal, Guyer never let the Lady Scots fully seize it. The Lady Scots never could muster the equalizer even with several more chances. Prior to the title game, Highland Park had only given up as many as two goals in a game one other time this season.

Highland Park beat Cedar Park, 2-1, in the state semifinals two days earlier. In that game, freshman Hope Hyde had a goal and an assist, while Diana Kay Manley added a goal and Sara Summers chipped in with an assist. The Lady Scots also beat the Lady Timberwolves, 1-0, earlier this season. Hyde was one of two freshman on this year’s squad. Highland Park will have 14 players back next season off this year’s roster.

“It was an amazing experience,” Hyde said. “We have great role models for our captains — Sarah Howley and Katie Martin. All of our seniors are great examples. They really pushed us through this year. We play as a team, which makes it so special. We wanted to play for each other.”

Brown, whose parents Philip and Elizabeth got to attend the state tournament from Scotland after missing last year’s tourney, said the Lady Scots will look to return to Georgetown again next season.

“Our ultimate goal is obviously always to win state,” Brown said. “It’s not easy. There are a lot of talented soccer players. We saw that today with Guyer.” 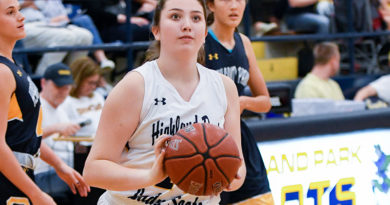