John Thomas Wright passed away peacefully on July 26, with his family by his side. Beloved husband, father and grandfather, he was lovingly known to his family as Tommy, Thomas, Daddy, Bebaw Boy, Babaw and Grandpa, and also known to co-workers, caregivers and friends as John or Mr. John. He was born in Ethelsville (Pickens County) Ala., to parents John W. Franklin Wright and Amelia Brownlee. According to family records, the year was 1913, although a subsequent duplicate copy of his birth certificate received over 35 years later, showed 1912 as the year.

Upon the death of his mother in 1914, he and his sisters, Mary and Florence, went to live with their maternal grandparents on the family farm in New Hope, Miss. Growing up in rural Mississippi, Tommy developed a lifelong love for baseball, hunting and fishing, carpentry, and woodworking. As with most young men during the early years of the Great Depression, after graduation from high school, Tommy found few employment opportunities available. For a time, he worked as a butcher in a local grocery store, as a pattern cutter in the garment industry, and for the highway department building roads. An offer to drive an elderly gentleman to Dallas to visit the Texas Centennial Exposition in 1936 changed Tommy’s life. Family members living in nearby Arlington convinced him that job prospects were much better in Texas at that time. The decision to stay in Texas was made, and Tommy quickly found employment with an up and coming men’s pants manufacturing company called Haggar.

Several years later, he was introduced to the love of his life, Vera Lucille Palmer, at Oak Cliff First Baptist Church. While Tommy continued to work at the Haggar Company, Lucille was an executive secretary for the Ripley Shirt Company. However, a call from “Uncle Sam” interrupted their marriage plans. For more than three years during World War II, Tommy faithfully served his country in the U.S. Army Signal Corps, stationed in the Aleutian Islands off the coast of Alaska. It was during this tour of duty that he acquired the telecommunications skills that would lead to his future career.

Post-World War II American saw an explosive growth in the telecommunications industry. After his return from the war, Tommy’s valuable experience in the Signal Corps allowed him to find almost immediate employment with Southwestern Bell Telephone Co. During a 32-year career, he worked on numerous large telephone-switch installations in almost every major corporation and office building in downtown Dallas. From his early experience in the garment industry in Mississippi, Tommy strongly supported union workers’ rights and was a member of the Communication Workers of America during his years with Southwestern Bell. He was also a lifetime member of the Telephone Pioneers of America. Tommy instilled a strong work ethic in his daughters, particularly the importance of punctuality and attendance, receiving numerous “perfect attendance” awards during his career.

Tommy and Lucille were married in January 1945. They settled in Oak Cliff, where they lived for more than 65 years, raising two daughters and enjoying five lively grandchildren. Outside of work, Tommy enjoyed hunting and fishing trips with his father-in-law, other co-workers, and his daughters. He was also a Mason for more than 30 years. His leisure time was spent gardening, landscaping or toiling in his workshop creating handcrafting furniture and other wood-working projects.

One of his true pleasures throughout his life was listening to radio broadcasts of professional sport events. He felt the radio’s play-by-play coverage was far superior to televised coverage and would often turn the TV volume completely off while listening to a baseball game on the radio. Tommy was a diehard Texas Ranger fan, and although declining health prevented him from attending their games, he always listened to the radio broadcasts.

During his retirement, he also spent countless precious hours with his grandchildren. Often, multiple grandchildren would be sitting in his lap or perched on the arms of his recliner while he read stories to them, enjoyed “tea parties” with the girls or playing toy trains with his grandson. Tommy loved his family deeply, not only his wife and daughters, but also his sons-in-law, whom he considered as true sons, and his grandchildren. Tommy was preceded in death by his beloved wife of 65 years, Vera Lucille Wright, his parents, and sisters. He is survived by daughter Carolyn Tipton and husband Glynn; daughter Patricia Erickson and husband Steven; grand-daughters, Erin Tipton, Elspeth Erickson, Elisa Tipton, and Kestrel Erickson; and grandson Rowan Erickson. 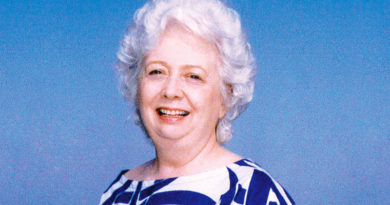