I can’t remember the last time I went to church before Sunday. But it will be hard to forget the service I attended that day.

The refurbished sanctuary was packed. Besides the St. Paul congregation and a contingent from Highland Park UMC, there were also visitors from Bluffview’s Cochran Chapel UMC, where St. Paul held services for 18 months, and Camp Wisdom UMC, which is led by the Rev. Janet Bell Odom, aka “the first lady of St. Paul United Methodist Church.”

Her husband, the Rev. Elzie Odom Jr., delivered a rousing sermon, but he was silent when he first stepped to the podium. Odom simply looked around the sanctuary with a smile, soaking in the atmosphere as the faithful shouted things like “it’s all right” and “take your time.”

When he finally spoke, Odom started with “Praise the Lord. Somebody say, ‘Hallelujah.’ … If you don’t think God is good, just stand on your feet and look around you,” he yelled. “You don’t even have to stand up; just stomp your feet on those wood floors!”

He said much more after that, but I had trouble hearing him, as the spirit moved the church’s five-piece band to crank up at that point. Members of the congregation began whooping it up as well.

Once Odom got through some announcements and thank-yous, he began his sermon, “A Miracle Made.” He said he recently gave a tour of the church to a clergy friend of his from Nashville, who told Odom the project couldn’t have been described in words. Odom’s response: “Miracles are like that.”

Odom said the miracle of the 137-year-old church’s renovation should not outweigh the smaller miracles available to those who devote their life to Christ. As he made his point, he dropped the name of Park Cities People‘s parent company, which gave me a chuckle:

“Oh yes, the TV cameras and D Magazine and all that, they got the public miracle recorded,” Odom preached. “But God wants to work a miracle in your personal life. God is in the miracle-making business.” 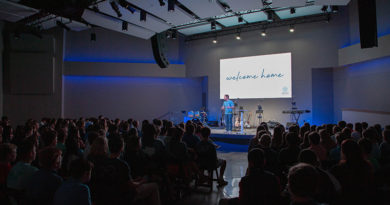