Just got a note from the lovely people at the Highland Park Crime Watch site. Turns out, some of the folks that have been breaking out windows and stealing the third-row seats of domestic SUVs were almost detained by HP DPS officers. We’ve covered this problem here before and in our dead tree version. It doesn’t look like thieves are likely to slow down as long as there are targets.

CBS (Channel 11) just posted a story about the problem.

HP DPS is suggesting you park in your garage, if possible. If not, park as close to your home as you can to deter would-be theives.

On July 22, 2010 at approximately 4:00am, Highland Park DPS officers came upon individuals attempting to steal the wheels from a parked GMC Yukon in Highland Park west of the Tollway. When officers attempted to stop the individuals, they fled in a vehicle. During the officers’ attempt to catch up to the vehicle they determined that the driver’s high speed, disregard of traffic lights, and reckless nature; the most prudent course of action was to terminate the pursuit.The vehicle was last seen fleeing Highland Park.

These suspects are believed to be associated with previous offenses in HP and other cities across the Metroplex. Evidence was found indicating they might return to Highland Park and try to commit the same crime, possibly stealing the third row seat, as well.

Highland Park DPS is asking everyone who drives an SUV similar to a this one to please park them in your garage or as close to your house as possible.

Are You Being Buzzed by Love Field Flights? 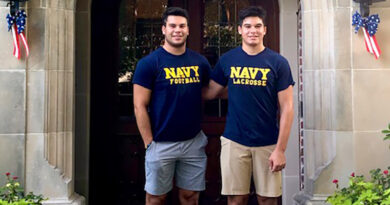 From Scots to Sailors

4 thoughts on “You Saw it Here First: CBS Picks up Story on SUV Scavengers”