When I was 21, the only thing of which I was chief operating officer was a nice cold can of Miller High Life. Now, I can’t say whether Brittany Davidson has a similarly refined beverage preference, but I can say the her resume already trumps mine by a couple of orders of magnitude.

The 21-year-old Kansas City-ite launched her own clothing design company, BMDesigns, after returning stateside from the American Intercontinental University of London where she studied fashion design and marketing, which she attended following a stint at the American University of Paris, where she began studying fashion design at 16. Add on top of all that the title of chief operating officer, which she assumed when she and her parents, Colin and Julie, purchased Chocolate Soup, which has five total locations.

For those of you who had been wondering why the kids’ clothing boutique had made such a tremendous 100-yard leap across Royal Lane to a space near Roy’s Natural Market, it’s because Davidson wanted to give “the old favourite a new twist with an updated look,” as she wrote in an e-mail. (And please forgive for that ‘u’ in ‘favourite’; she’s not some anti-American Anglophile, at least as far as I know, but her father is from the U.K. and she did spend her formative educaitonal years in London).

The new store will offer “a more modern appeal with both trendy and traditional pieces for your little ones with a certain fashion forward flare,” Davidson writes. “Her European designs are exclusive and will only be available in Chocolate Soup stores.” Word is, a Houston location is in the works and a new Chocolate Soup website will be launched soon. 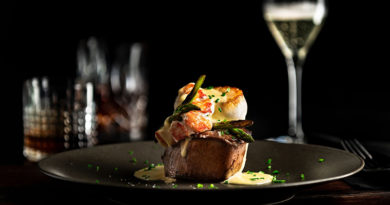 Eat Your Heart Out: Nine Places to Dine Valentine’s Day